This May Sound Strange: Sonic Lasers and Sonic Black Holes 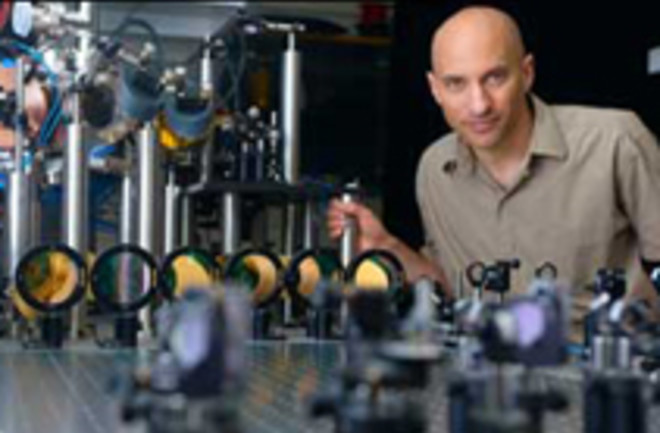 In several labs around the world, sound waves are doing things they've never done before. Teams working in England and the Ukraine have made a sonic laser, or "saser," which operates in the terahertz range, with sound waves oscillating more than a trillion times per second. Meanwhile, in an Israeli lab, researchers say they've created the first ever sonic black hole that traps sound waves and won't let them escape. The saser

uses packets of sonic vibrations called "phonons" much like a regular laser uses photons. Specifically, the acoustic laser device consists of a sonic beam traveling through a "superlattice" constructed of 50 sheets of material each only atoms thick that are alternately made of gallium arsenide and aluminium arsenide, two materials found in semiconductor [CNET].

The phonons bounce back and forth inside the lattice, which causes more phonons to be released and amplifies the overall signal.

The result is the formation of an intense series of synchronised phonons inside the stack, which leaves the device as a narrow saser beam of high-frequency ultrasound [New Scientist].

At the moment the terahertz saser, described in a paper published in the journal Physical Review B, is mainly a neat trick, but it may find practical applications down the line, says lead researcher Tony Kent.

"Fifty years ago many eminent scientists said that light amplification by the stimulated emission of radiation [lasers] was no more than a scientific curiosity," says Kent, but lasers are now used for everything from digital storage and cancer treatment to weaponry [New Scientist].

Kent says the new saser technology could lead to breakthroughs in imaging for tiny, nanoscale objects. In the other acoustic accomplishment, researchers created the first sonic black hole, which have existed in theory only for 30 years. In astrophysics, a black hole is a region where gravity is so great that nothing, not even light, can escape. In the sonic black hole, researchers created a region from which sound could not escape. They used two Bose-Einstein condensates: clouds of atoms cooled to near absolute zero, where the atoms can't reduce their energy any further, not even through friction. In the paper, posted on the preprint site arXiv in advance of publication, lead researcher Jeff Steinhauer shows that the atoms flow between the two clouds faster than the speed of sound. Since sound waves can't propagate any faster than the speed of sound, any sound wave trying to move through the flowing atoms

will fall farther and farther behind, never able to escape the sonic event horizon. "It's like trying to swim slowly against a fast current," said Steinhauer. "The sound waves fall behind because the current is moving faster than the waves" [Discovery News].

(For a more technical description of the study, see DISCOVER's Cosmic Variance blog.) What's more, further experiments with sonic black holes could help prove the existence of Hawking radiation, first predicted by the physicist Stephen Hawking in the 1970s. Quantum mechanics predicts that pairs of particles can spontaneously appear in empty space; Hawking argued that if they happen to appear on the edge of an event horizon, one particle can be drawn into the black hole by gravity while the other escapes, thus giving the appearance of radiation from the back hole. If stray phonons are found outside the event horizon of the sonic black hole, it will help validate the idea of this Hawking radiation.

"This is about understanding the basic laws of physics," said Steinhauer. "What this research is good for in day to day life I'm not sure, but we as humans want to understand how the universe works" [Discovery News].