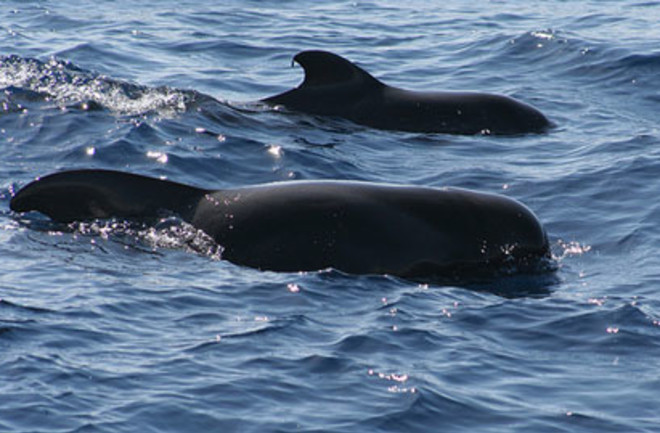 The plan would let Japan, Norway and Iceland hunt the ocean giants openly despite a 1986 moratorium on commercial whaling. In return, whaling nations would agree to reduce their catch "significantly" over 10 years [AFP].

These pro-whaling nations have kept up their hunts either by officially objecting to the moratorium or by insisting that they're killing whales for scientific research. The proposal is due to be submitted before the body's annual meeting in June in Morocco, leading some conservationists to complain that the IWC should "save whales, and not whaling." The details of the proposal will made public on Earth day--April 22. Calling the withdrawal of the ban "the best chance to fight overfishing of these animals," U.S Commissioner to the IWC Monica Medina said:

"It's a global problem, and needs global solutions" [Washington Post].

, pointing out that 1,800 to 2,200 whales continue to be killed each year. "It's great to be showing success, but should we be planting the flag and saying, 'We're there'?" asked Howard Rosenbaum, who directs the ocean giants program at the Wildlife Conservation Society. "We're not out of the woods yet"

They say that despite the rise in numbers, several species still struggle to survive. Just 130 or so western Pacific gray whales swim off the coast of Russia now -- compared with at least thousands, if not tens of thousands, in the past -- and they are still vulnerable to being caught in Japanese fishing nets and offshore energy projects. Even one of the populations that made major gains over the past few decades, the Southern right whale, is experiencing a sudden die-off. Since 2005, researchers have identified 308 dead whales in the waters around Argentina's Peninsula Valdes, an important calving ground, and 88 percent of the dead were calves less than three months old

.Critics argue that the resumption of commercial whaling would not just endanger future whale populations but would also legitimize behavior by countries like Japan, which many accuse of

overfishing the waters of the Southern Ocean sanctuary and which recently won a victory in Doha, Qatar where a proposed ban on the trade of the bluefin tuna was shot down. Norway and Iceland have already disregarded the IWC's moratorium and have hunted whales commercially.

Australia, meanwhile, has been extremely vocal in its opposition to the proposal, with a spokesman for the Environment Ministry, Greg Hunt, saying it would set too dangerous a precedent. "

It is not about protecting whales, it is about a shoddy deal which gives the green light to whaling and is a white flag on plans to end whaling," he said [Australia Network News].The United States, while opposed to commercial whaling, said it was waiting to see the final proposal.

The proposal needs a three-quarters majority vote to go ahead. A number of IWC nations have yet to declare their position.Related Content:80beats:Bluefin Tuna Is Still on the Menu: Trade Ban Fails at International Summit 80beats: Videos Show Collision Between Japanese Whaling Ship & Protesters 80beats: Is the Whaling Ban Really the Best Way to Save the Whales? 80beats: Controversial Deal Could Allow Japan To Hunt More Whales