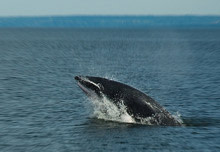 Behind closed doors, members of the International Whaling Commission (IWC) have been discussing a proposal that would give give Japan the right to hunt whales in its coastal waters. IWC officials say the controversial proposal is a compromise measure, as Japan would also have to agree to limit its hunts in the Southern Ocean, but opponents say it amounts to an official sanction of Japan's whale hunts. The International Fund for Animal Welfare argues that the proposal is

part of a dangerous drift towards commercial whaling in the 21st century."This is Whalergate," the global director of the fund's whale program, Patrick Ramage, said [Sydney Morning Herald].

The proposal was put forward by American commission member William Hogarth, a Bush appointee, who has argued that a compromise is necessary to keep Japan from withdrawing from the commission.

In recent years, the whaling commission ... has been deadlocked between the anti- and pro-whaling camps. Rather than setting a clear direction for conserving and managing whale populations worldwide, its meetings have become contentious donnybrooks in which the two sides have competed for influence while little changed. Worldwide, three countries -- Japan, Iceland and Norway -- continue to hunt whales, either in the name of research or, in Norway's case, under a commercial exception established more than 20 years ago [Washington Post].

The draft proposal suggests that Japan be allowed to engage in "coastal whaling" along its shores, although it doesn't specify how many whales could be killed under such a plan. In return, Japan would have to scale back the annual whale hunt it conducts around Antarctica, in what the Japanese government calls "scientific" whaling.

Japan has begun taking more whales in recent years under the science designation, killing 872 in 2007, compared with 540 in 1997 [Washington Post].

The proposal says that the IWC could either come up with a "sustainable" limit on the number of Antarctic minke whales that could be killed each year, or that hunts in the Southern Ocean could gradually be phased out altogether. The proposal has already generated intense resistance from wildlife conservation groups, who say that increased whaling in Japan's coastal waters will put additional stress on whale populations near Japan. The International Fund for Animal Welfare also takes issue with the proposal's statement that

the global moratorium on commercial whaling "will remain in effect". Mr Ramage said: "That seems to rank alongside 'there is no recession' and 'there are [weapons of mass destruction]' as an Orwellian approach beyond belief" [Sydney Morning Herald].