We don't always know what's happening in squirrel brains, except the fact that they're reacting to us. 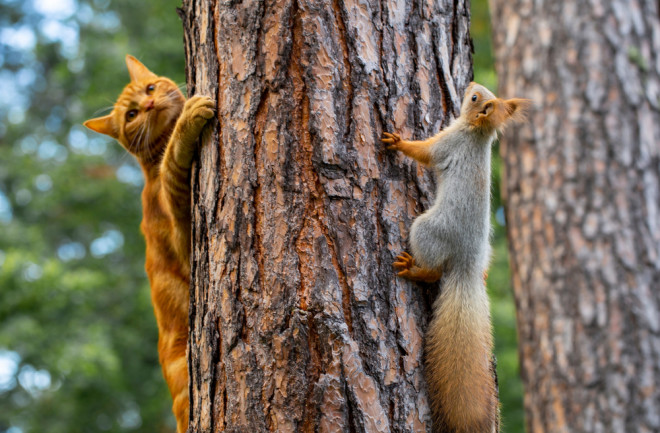 From the squirrel that stole your sandwich to the one that sat strangely close to your friend on the park bench, or the one that made prolonged eye contact on your run, most of us have had strange encounters with these skittish creatures. As our urban populations become denser, more and more people may encounter squirrels that seem bolder, smarter or more aggressive. At least, those might be the words you find yourself using to describe your squirrel encounters.

But is that what’s actually happening? Discovering the true reason behind a given squirrel's behavior is challenging, even for the people who study them. And it's possible that as you recount your wild squirrel story, you might be misinterpreting the situation — or forgetting to consider that from the animal's perspective, you might be the one acting strange.

Though we might talk about urban wildlife becoming "smarter" or "bolder," those are challenging terms for behavioral researchers to design studies around. Like in humans, an animal’s intelligence is distinct from their personality.

If a squirrel were to sneak into a park trash can looking for food at night when no one is around, maybe it is smarter than others because it knows when the threat of humans is lowest. Or, maybe the squirrel isn’t particularly smart, just shy. And if one runs up to park benches snatching crackers out of people’s hands, is it intelligent for simply identifying a viable snack and grabbing it? It's possible the squirrel is only aggressive and bad at problem-solving — which might mean that in other park encounters, onlookers would think the squirrel is of completely average smarts. As to which factor plays a larger role, smarts or personality: “We don't know, because we don't have proper evidence to support it at all,” says Pizza Ka Yee Chow, an animal cognition researcher at the Max Planck Institute for Ornithology in Germany.

It's not clear if any experimental set-up would be able to tell researchers definitively whether a squirrel's personal tendencies or their mental aptitude drive a specific behavior, Chow says. Also, when someone calls a squirrel “bold,” there are all kinds of ways to interpret that characteristic.

“Boldness is a useful, easy word,” says Kenta Uchida, a behavioral ecologist at the University of California, Los Angeles. But it doesn’t capture all the reasons why a squirrel might ignore you as you get close. (After all, we only recently began recognizing complex PTSD-like symptoms, and behaviors, in wild animals that have survived predator attacks.) Uchida has tried to gain some insight with field studies.

Read More: Animals In The Wild Can Get PTSD, Too

When he decided to study why squirrels seem bolder in urban settings, Uchida broke the concept into two parts: Whether city rodents were more accustomed to humans, or whether their willingness to respond to all threats had lessened. When a person approached the squirrels, or slid a taxidermic red fox in their direction, Uchida and his team recorded how long it took the animals to notice and flee from the newcomer. Rural squirrels responded to both about the same, and while city squirrels let the approaching threats get closer, they consistently ran from the fox well before they sprinted from the humans. These so-called bold city squirrels weren’t fearless — they just only saw people as a threat once they got unusually close.

The experiment earned Uchida some reactions from passersby — sliding a stuffed fox on a platform towards squirrels drove young people away but made seniors come up to him and ask questions. But it was specifically designed to connect what’s going on in a squirrel’s brain to their actions. Uchida had to know what behaviors to look for and what they meant, something a biologist might not know unless they’ve been watching a given species for a long time.

Obviously, most people going about their lives haven’t spent years documenting squirrel behavior. So when your friend talks about the aggressive squirrel they ran into, the encounter might lack some of the hallmarks of "aggression" biologists would look for, like biting or scratching. One that’s approaching you with its tail up and flicking around probably is feeling combative, too, Chow says. In other species living near humans, such as birds, attack-like behavior might be something you would see if you get too close to a nest.

What If You're The Weird One?

Of course, most park-goers might not be able to tell when they’re getting too close to a squirrel’s babies, which brings up one last reason why you might think you’ve had odd encounters with the rodents: You’re forgetting to factor in the strange and unexpected things you did that prompted a reaction.

In 2014, a research team walked around New York City parks, getting within six feet of squirrels and recording the reactions. When people stayed on the paths and avoided looking at the squirrels, almost all the animals stayed in place and didn’t show any sign that someone was a short distance away. But when people veered into the grass and looked at the squirrels, 90 percent took off, sprinting farther and sooner than the few in the former group who did move. Maybe people expect squirrels to scamper as soon as they get close. But these New York rodents could read the differences in park goers’ behaviors and reverted to their old, twitchy ways as soon as people started to make choices they weren’t familiar with.

If squirrel behavior depends on what humans do, then squirrels might be a little different from city to city. In a recent study they worked on together, Chow and Uchida, who are both also affiliated with Hokkaido University in Japan, recorded squirrels in 11 different sites throughout Obihiro, Japan as the animals tried to solve a puzzle box to obtain a nut as a reward. Squirrels in areas with the highest number of humans were not as good at figuring out the lever and pulley system.

The result initially surprised Chow, considering how other research has shown that having lots of people around can make wildlife better problem solvers. But Obihiro doesn’t encourage people to feed animals, and any time someone with a dog passed a squirrel working on the puzzle, the latter scampered, Chow says, showing just how much each city and unique squirrel interaction can vary.

As appealing as it might be to assume all city squirrels are getting bolder, every encounter is different — and if squirrels could talk, they might have a very different idea about who was the one acting oddly. Because if you think we're the only ones wary about what the other species might do, you have it backwards, Chow says. “They keep their eyes on us, and we keep our eyes on them.”