What Is Red Tide – and Is It Getting Worse? 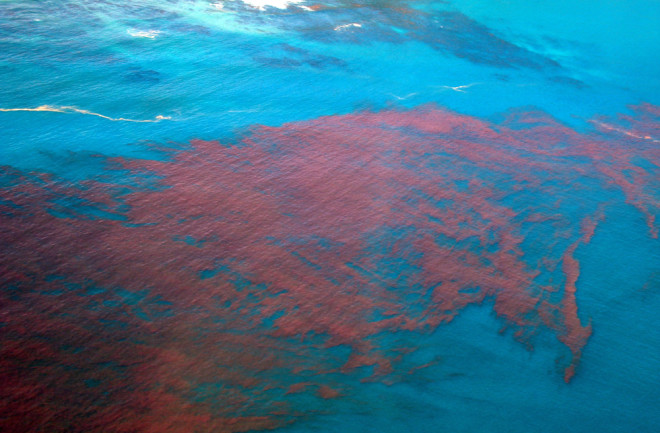 Katherine Hubbard was off the Gulf Coast of Florida near Sarasota when dead and dying fish began to rise to the surface of the sea around the boat. She was collecting samples to analyze for an infamous type of algae scientists know as Karenia brevis in the winter of 2014-2015. For most of the morning the sea had been calm, but around noon dozens of the moribund fish — some as large as 14 inches — began to pop up as far as they could see.

Most of the general public refers to K. brevis as red tide, the algae known for ruining beach vacations with skin irritation, burning eyes and even more severe problems. Occasionally, red tide can indirectly cause neurotoxic poisoning when it gets into shellfish humans later consume. For marine life, it can mean droves of dead and rotting fish washing up on shore for miles.

But while scientists have learned a lot about the periodic blooms of this toxic algae, there is still much to understand, including questions about whether it’s getting worse due to factors like climate change or pollution.

While red tide may seem terrible to beachgoers, or for the thousands of fish that wash up dead during a bloom, the dinoflagellates form part of the native ecosystem, as far as scientists can tell. Some of the earliest reports of red tide may go back as far as Spanish explorers — according to Hubbard, fish kills they recorded in the 1500s may have been the result of red tide blooms.

“It’s definitely something that’s been going on in the Gulf for a long time,” Hubbard says.

As evidence, an 1881 report published in the Proceedings of the United States National Museum described a large-scale fish die-off.

“It appears that this misfortune is not a new experience in the eastern part of the Gulf of Mexico," wrote U.S. Fish Commission scientist Ernest Ingersoll. "One of the oldest residents on the Floridan coast, Mr. Benjamin Curry, of Manatee, told me, what others confirmed, that as far back as 1844 a wide-spread destruction of all sorts of salt-water animal life occurred, apparently due to causes precisely similar to those which produced the lately noticed desolation.”

Ingersoll and the others he corresponded with don’t nail down the cause of these die-offs other than noting that people blamed “poisoned waters,” but these reports are consistent with later reports of red tide.

Modern science has revealed that while red tide seems to appear from nowhere, there are always algae cells of K. brevis in the deeper waters of the Gulf. There may be other reservoirs in sediment as well, though scientists aren’t yet clear on the lifecycle.

“Red tide doesn’t just occur at the surface, it occurs throughout the water column,” Hubbard says.

Red tide blooms can occur closer to shore when offshore currents push the algae into shallower waters. “When they move inshore, they are accessing different light levels and different nutrient sources,” Hubbard says, adding that this may help the algae bloom.

While large blooms of the algae can be unpredictable, there is some degree of seasonality to them as well. The blooms usually start in late summer or fall, then disappear by late winter or spring in the Gulf and surrounding waters. But when large blooms occur, they can last all year — even into the timeframe when a new bloom season would normally begin.

These larger blooms are less predictable, and can last for years. The worst one on record occurred in the late 1940s through the early 1950s.

More recently, the Gulf Coast experienced a bad bloom between 2017 and 2019, with a very large area of red tide and a lot of dead fish.

It’s difficult to determine how large a bloom is because it can’t be as easily detected in deeper water. But Hubbard says that the types of fish that come up can give us clues — when bottom-dwelling species float up, for example, we know the bloom is quite large. The algae usually move up the water column during the daytime to access energy from the sunlight through photosynthesis. And fish kills can be massive. During some blooms, single counties in Florida have reported more than 1,000 tons of dead fish.

Red tide is difficult to track and assess for a number of reasons. It seems to do well in a wide variety of conditions and doesn’t appear consistently in the same areas. As a result, it’s difficult to track trends and determine whether the algae is getting worse due to climate change or other wide-scale regional changes.

Hubbard and her colleagues are getting around these difficulties by looking at sediment samples from the last 25 years to see if blooms might leave biomarkers. Researchers in China have found traces of a related red tide species found globally, Karenia mikimotoi, and markers of the resting stage of this species going back 50 years.

What’s in Store for the Future

Agricultural runoff has resulted in blooms of blue-green algae in freshwater bodies across North America but it’s also difficult to track red tide once it enters estuaries, so scientists are still unclear about how these chemical pollutants contribute to large blooms.

Since K. brevis seems to thrive in different temperatures and conditions, Hubbard says it’s also difficult to determine whether climate might be exacerbating or dampening red tide blooms. One study has found that warmer waters resulted in increased growth rates, while another study found that warmer climates could result in increased toxins released by the algae.

How it will do in different areas is unclear, but research indicates red tide will be able to thrive in a variety of future conditions and currents, Hubbard says.

The fact that K. brevis is different from red tide species that occur in Asia and isn’t found elsewhere in the world likely means it evolved in the Gulf ecosystem. This means that even though the algae kills large amounts of sea life, it may not be all bad for the ecosystem. No research has been conducted on the potential ecological benefits of these blooms, but Hubbard speculated it could be likened to wildfires being important for forest regeneration. Red tide blooms may kill a lot of species, but this may provide new opportunities for growth for other marine life.