For the Maya and Romans, toxic pollution likely rendered water undrinkable for centuries at a time. 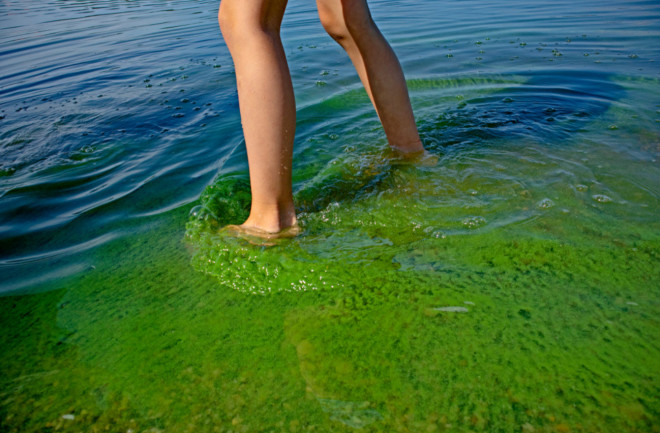 Since the 1990s, Lake Erie has been periodically swamped with algal blooms that turn its waters a bright green color. The plague reached a crescendo in 2011, when pernicious algae covered a record-breaking 2,000 square miles and threatened the drinking water of millions of people. Experts say similar blooms will become more frequent in the near future.

When an excess of nutrients such as nitrogen and phosphorus accumulate in a body of water, algae can grow out of control. There, algal blooms create “dead zones” by greedily consuming the environment’s oxygen and blocking sunlight from reaching underwater plants. Some blooms, called harmful algal blooms because of the danger they pose to humans and other animals if consumed, are produced by a type of algae called cyanobacteria that churn out harmful toxins.

Lake Erie’s algal blooms flare up when rainfall washes the nutrients left behind by human activity — mainly in the form of agricultural fertilizers and untreated sewage — into connecting streams. Freshwater ecosystems around the world share a similar risk, especially as climate change makes intense storms more common during spring and summer.

But, although such anthropogenic influences ramped up during the industrial era, algal blooms are not a modern phenomenon. In fact, unbeknownst to scientists until recently, ancient cities also dealt with toxic pollution; and the blooms may even have contributed to the eventual demise of civilizations.

The pre-Columbian Maya civilization once stretched across hundreds of miles in modern-day Mexico, Guatemala and Belize. It boasted more than 40 intricate cities, advanced agriculture techniques and a booming economy. But sometime between the eighth and 10th centuries, the Maya abandoned everything — leaving their large cities to be destroyed by the encroaching jungle.

Read More: The Lost World of the Maya is Finally Emerging From the Jungle

Archaeologists have proposed a number of reasons for the sudden population fluctuations, ranging from war and trade disruption to drought and deforestation. Recently, however, research has pointed toward algal blooms potentially playing a role.

In 2020, a geochemical analysis by University of Cincinnati scientists found that two large reservoirs near a palace and temple in Tikal — an ancient Maya city in northern Guatemala that was abandoned during the late ninth century — contained two types of cyanobacteria around the same time. Although other reservoirs that ringed the city had fewer contamination problems and therefore ample potable water, a series of droughts that occurred shortly after, from around A.D. 820 to 870, might have forced the people of Tikal to become desperate.

"The conversion of Tikal’s central reservoirs from life-sustaining to sickness-inducing places would have both practically and symbolically helped to bring about the abandonment of this magnificent city,” write the study’s authors. They suggest that because the authority of ancient Maya rulers was linked to the provision of clean water, algal blooms combined with ongoing drought might have been viewed as a failure to appease the gods.

That being said, the link between cyanobacteria and toxicity is complex. Just as it’s possible for a very small bloom to produce a large amount of toxins, it’s equally possible for a bloom not to produce any toxins at all. Last year, however, a team of researchers led by Auburn University paleolimnologist Matthew Waters found evidence of both algal blooms and their associated toxins near another major Maya city.

In a study published in PNAS, the researchers examined an 18-foot-long sediment core from Lake Amatitlán in Guatemala, representing the past 2,100 years. Today, the lake often turns a bright green color, as it routinely sees some of the most harmful algal blooms in the world. Waters and his colleagues discovered a similar rise in toxicity from A.D. 550 to 1200, a period that coincides with high human population numbers in the area and the expansion of the nearby Maya city of Kaminaljuyú.

The study’s authors concluded that the Maya “experienced [harmful algal blooms] that were similar in intensity to those in the modern lake and that ancient watershed inhabitants likely had to contend with compromised water quality…” Although it’s unlikely that the blooms were the sole reason for the destabilization of Maya society, if the same scenario played out in other cities as well, the lack of potable water could very well have been a contributing factor.

The theory is a stark reminder to carefully manage our own land and water. Although we modify our environments with the best of intentions, often we bring about unintended consequences even today — some of which, like algal blooms, can have lingering impacts for centuries.

A 2019 study published in Earth and Planetary Science Letters, for example, examined how long it took for Switzerland’s Lake Murten to recover from an algal bloom that occurred during the height of the Roman Empire. Around 20,000 people lived in the nearby city of Aventicum, now mostly in ruins, during the first and second centuries. Archaeological evidence shows that the Romans cleared a significant amount of land around the city for farming during this time, which led to increased runoff of nutrient-rich soil into the small Lake Murten until after its abandonment in the third century.

The lake didn’t bounce back quickly. The researchers found that it took around 50 years for the lake’s bottom-dwelling organisms to recover from the lack of oxygen in the environment; but another 250 years passed before the surrounding vegetation, struggling to recover from extensive deforestation, was strong enough to prevent soil (and therefore more nutrients) from continuing to erode into the lake.

“These findings suggest that the legacy of anthropogenic perturbation to watersheds may persist for centuries,” write the study’s authors, adding that recovery rates for modern pollution issues are likely to be equal or even slower.