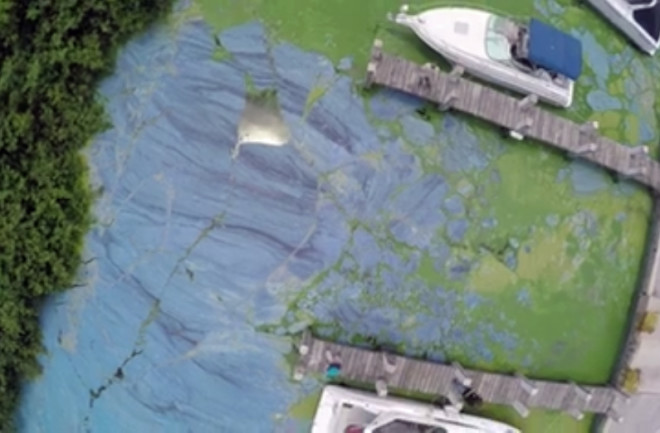 Footage from a drone video of the bloom. (Credit: Dylan Hansen/Balance For Earth) Massive blooms of potentially toxic cyanobacteria are washing onto beaches in Florida, keeping beach goers at home and raising concerns about possible impacts on public health. The bacteria belong to the genus microcystis, meaning they are not technically algae, and are known to appear in areas with high concentrations of nitrogen and phosphorus. Both compounds leach into Florida's Lake Okeechobee from industrial farming activities in the area. And when conditions are right, the blooms produce a toxin that can cause kidney and liver damage, as well as painful rashes in those exposed to it.

A confluence of events likely contributed to this season's outbreak of microcystis, which migrated down the St. Lucie river to the Atlantic Ocean, where blooms are inundating beaches and suffocating tourism. Lake Okeechobee is bounded by a series of dikes maintained by the U.S. Army Corps of Engineers, a system that is some 80 years old and in need of repairs, reports the New York Times. In El Niño years, the region tends to see more rain, and the Army Corps releases more water from the lake to prevent flooding, a process that started about two weeks ago — and it has since reduced the flow of water. While such blooms occur with more regularity in the lake itself, when nitrogen- and phosphorus-laden water is discharged through the St. Lucie and allowed to flow into the ocean it can trigger massive blue-green blooms like the one currently swamping the coast. Microcystis needs both phosphorus and nitrogen to grow, and nitrogen is also used to produce the toxins that make it dangerous, says Richard Stumpf, an oceanographer with the NOAA who studies algae blooms. The algae produce both neurotoxins and hepatotoxins, which affect the liver and digestive system.

Microcystis aeruginosa (Credit: Wikimedia Commons) Lake Okeechobee possesses high levels of both chemical elements as a result of intense fertilizer use in the region, much of which eventually makes its way into the lake. Microcystis comes in both toxic and non-toxic strains, says Stumpf, and the potential for toxicity depends on which strain is able to outcompete the others, in addition to how much nitrogen is available in the water. The exact role that the toxin produced by microcystis plays in the cyanobacteria physiology is unclear, but it may help the bacteria help hold on to precious nitrogen. It may also serve as a deterrent for the shellfish and other small marine animals that eat microcystis. "A bloom, when it starts off, there can be a lot of nitrogen, and then it gradually gets used up … typically, blooms become less toxic as they progress," says Stumpf. "If there’s a lot of nitrogen, then they can make the toxin, if there’s insufficient nitrogen for their cellular work, they won't."

As the BBC reports, testing the bacterial blooms has confirmed that they are indeed toxic. Florida Gov. Rick Scott has declared a state of emergency in the four counties hit hardest by microcystis. Algae blooms can become deadly if left unreported, especially in developing countries. The WHO reports that 42 people died in 1988 after drinking water from a cyanobacteria-contaminated reservoir in Brazil. A similar event occurred in Australia, where some 140 people developed symptoms of liver disease after blooms were reported in a nearby reservoir. Such cases are usually easy to deal with, although the fact that the cyanobacteria blooms in Florida occur over a wide area make treating them much more difficult. Still, the main danger to humans is from drinking contaminated water, so the impact on public health should be negligible if residents follow the safety precautions. In addition to mammals, the blooms are also harmful to fish populations in the area. When the bacteria begin to rot they suck oxygen out of the water, causing fish to suffocate and die. Stumpf says that there's not much to be done at the moment. While chemicals such as peroxide and more natural treatments such as packets of barley straw have been shown to kill off blooms in small, contained areas, the sheer size of the microcystis invasion, combined with the presence of tides, makes it very difficult to clear the blooms. He emphasized that preventative tactics are needed to control future blooms, and regulating the levels of chemical runoff in Lake Okeechobee is a primary concern. Because the bacteria need nitrogen to both survive and produce toxins, reducing nitrogen levels could significantly impact the amount of cyanobacteria in the water.