One hundred and seventy-four years ago, Charles Darwin first set foot on the Galapagos Islands aboard the Beagle. Since then, the islands and the unique species they house have been a source of inspiration for many an evolutionary biologist. Even so, it is gratifying to see that even now, on the bicentennial of Darwin's birth, the Galapagos have not yet finished yielding their secrets. 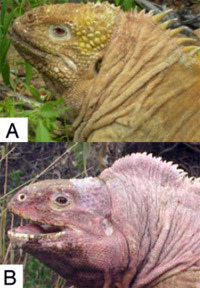 During Darwin's five-week stint on the Galapagos, he observed two types of iguana. One was a marine version that, uniquely for lizards, swam and fed in the ocean, and the other was a cactus-eating landlubber, which we now know to be two separate species. But Darwin's adventures never took him as far north as Volcan Wolf, the northernmost volcano of the large Isabela Island. And that's why he never described the distinctive pink land iguana that lives only on that volcano.

To be fair to Darwin, even scientists who actually visited Volcan Wolf failed to spot the pink land iguana for the better part of a century. Despite its striking pink head and black-striped flanks, it was only discovered when park rangers accidentally stumbled across it in 1986. They must have thought that they were the victims of some elaborate practical joke.

Atheists will no doubt chuckle at the existence of a pink animal that's so hard to find it may as well be invisible. The fact that it lives in the Galapagos of all places is just the icing on the irony-cake. But I digress.

The elusive iguana has since been christened the "rosada" form, after the Spanish word for "pink". And according to Gabriele Gentile, it's a species in its own right, genetically distinct from the more common yellow versions. Gentile's team of international scientists from Italy, the USA and Ecuador have analysed the pink lizard's genes to show that it is a relict, older even than many of the current Galapagos Islands themselves. 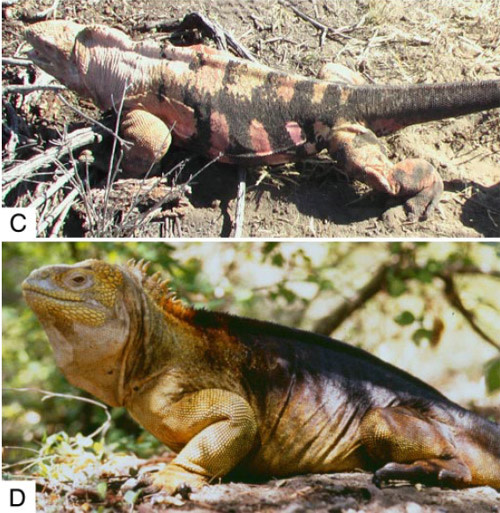 Until rosada hit the scene, there were just two species of land iguana - the "original" Conolophus subcristatus, and its more recent taxonomic spin-off, the Barrinton land iguana Conolophus pallidus. Both are yellow and both live on separate islands. The rosada form is very different in looks and behaviour. It's a distinct shade of pink with black stripes along its torso and tail, and it has a distinct fatty crest on the back of its head which the other iguanas lack. Like the yellow species, it bobs its head to attract mates and defend its territory, but the signals it uses and the meanings behind them are entirely its own.

Gentile compared the four types of iguanas - three land and one marine - by taking blood samples from individuals at 16 sites and 7 islands throughout the archipelago. By sequencing key genes, she built a family tree of the animals. This genealogy revealed that the rosada form is a sister group to all the other land iguanas, no matter which island they hailed from. Even yellow iguanas from Isabela were more closely related to yellow iguanas from other islands than they were to the pink ones that shared the same rock.

All the pink individuals grouped together too in a genetically distinct group, proving that they weren't just a differently coloured mutant of the familiar yellow species. Nor did they have any ties with the marine iguana, ruling out the possibility that they are a bizarre hybrid of the land and marine species.

The two colours don't breed with one another either, or at least not very frequently. Gentile found no evidence that the rosadas had incorporated any genes from their yellow cousins within the last two generations, even though some clearly share the same island. Only one yellow individual showed possible signs of having a pink grandparent.

The new iguana family tree suggests that the rosada line split off from the other land iguanas about 5.7 million years ago, when many of the modern Galapagos islands had yet to poke their tops above the water. This new date calls for a major revision of our current picture of iguana evolution on these islands - earlier estimates suggested that the land iguanas diversified no earlier than 1.8 million years ago. And why this early pink offshoot should now be confined to Volcan Wolf, the youngest of Isabela's volcanoes, is a mystery.

To Gentile, the rosada form clearly counts as a "good" or genetically distinct species but she fears for its future. Based on what we know about it, it would probably enter straight into the "critically endangered" category of the IUCN's infamous Red List. Its presence should provide conservationists with even stronger cause for protecting these unique lizards in this most wonderful of island chains.