Geckos are nature's champion climbers. With remarkable ease, they can scamper across ceilings and up smooth vertical surfaces, and they do so at speed. A vertically running gecko can cover 15 times the length of its body in a single second. So far, scientists have focused their attention on the gecko's amazingly adhesive feet but a new study demonstrates the importance of a neglected piece of their climbing gear - their tails. Geckos use their tails to stop themselves from falling, and to land safely if they do. 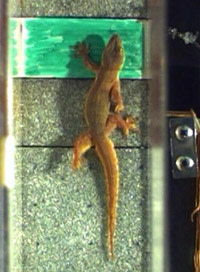 A gecko's foot is a marvel of biological engineering. Rather than relying on glues, suction or static, they stick to surfaces by exploiting 'Van der Waals forces', the weak forces that bind molecules together when they come in close proximity. Their technique was discovered a few years ago by researchers from the lab of Robert Full.

Each toe is covered in hundreds of thousands of tiny hairs called setae, and each of these is divided into up to a thousand smaller spatula-shaped hairs, just 200 nanometres long. When the gecko takes a step, these tiny hairs insinuate themselves into microscopic nooks and crannies so that even though the gecko has just five toes a foot, it's effectively touching a surface in millions of different places.

The molecules of the setae become attracted to those of the surface and while these forces are individually very weak, their collective effect is strong enough to hold the gecko up. Nonetheless, even a gecko has its slippery moments and that's when the tail comes into play.

Ardian Jusufi, also from Full's lab, watched flat-tailed house geckos (Cosymbotus platyurus) as they clambered up vertical tracks made of perforated board. The material is easy to grip and no challenge for the sticky-footed geckos, which ran up them easily with their tails raised above the surface.

But when Jusufi added a slippery patch to the track, it caused the gecko's foot slipped mid-climb and the lizards reacted by using their tail as a fifth leg. Within just 50 milliseconds, each animal had reflexively swung its tail against the wall to brace themselves and prevent their bodies from pitching backwards. You can watch this happening in two Quicktimemovies. 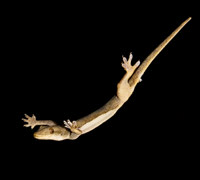 The tail reflex helped the geckos to deal with minor slips but even if it fails, the geckos can cope. Junufi found that during larger slips, the gecko presses most of its tail against the wall, using it like a bicycle kickstand. With this extra support, the lizard's body could be flailing off the surface at a 60 degree angle, and still it managed to right itself and regain a foothold in a tenth of a second. Again, you can see the technique in this movie. This technique always worked; in contrast, geckos that had lost their tails failed to recover for one in five slips.

Even if the geckos did fall off (or indeed, if they jumped), they always managed to land on their feet (video) with an accuracy usually attributed to cats. But unlike cats, which twist their spine to reorient themselves, the geckos kept their body completely stiff in the majority of falls. Again, the tail was the key. Tailless geckos, which were more likely to fall in the first place, only managed to rotate about halfway before they hit the ground.

Once airborne, the gecko spread its legs out and whirled its large, fatty tail around to rotate its body the right way up. If the gecko spun too far, it could right itself again by rotating its tail in the opposite direction. Once it was face-down, it could use flanges of skin between its toes and on its sides as parachutes to slow its fall and glide to the ground, a trick that's also used by the so-called 'flying gecko'. The whole process is over within a tenth of a second, far faster than a cat or for that matter, any recorded animal without wings.

Once the geckos had reoriented themselves, Junifi found that they could also use their tails as rudders to steer the direction of their glide and control the pitch and yaw of their bodies (movies here and here). When he placed them over vertical wind tunnels, the geckos managed to hover in the column of air and glide towards a solid platform.

Junufi's work shows that a flat-tailed gecko's tail plays an active part in its climbing ability. It will interesting to see if other gecko species, or indeed other lizards, use the same strategies. 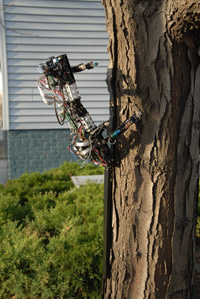 For the moment though, the study has already been put to unusual but practical use - to design a wall-crawling robot called RiSE (Robot in Scansorial Environment). The robot (right) can climb up trees, fences and brick walls and it's based on Full's work on geckos and other expert wall-crawlers.

Ironically, it was the falls of an earlier tailless version of RiSE that made Full decide to investigate the uses of a gecko's tail in the first place. Now, the engineers behind RiSE have added a tail to their robot following the lab's latest findings. It's a wonderful case of technology inspiring science inspiring technology.

All images courtesy of Full lab