Lizard claws shed light on the evolutionary origin of hair

Hair, or fur, is one of the hallmarks of mammals, the group of animals to which we belong. It is an evolutionary innovation that provides us with protection and helps us to maintain our constant body temperature And while hair is a uniquely mammalian feature, its genetic building blocks are anything but. A new study has found that genes responsible for building the locks on your head have counterparts that construct the claws of lizards.

Hair is made of proteins called keratins, which interact with each other to form long, hard filaments. Keratins are widespread in the animal world but those that make up mammal hair are different to those found in scales, claws, feathers and beaks of birds and reptiles.

Until now, scientists had thought that hair keratin genes were a mammalian innovation that evolved after our ancestors split away from those of reptiles and birds, some 310 million years ago. Indeed, previous studies have failed to find such genes in species other than mammals, but a new analysis from Leopold Eckhart from the University of Vienna changes all of that.

Within the genomes of a chicken and a green anole (a type of lizard), Eckhart's team found equivalents of human hair keratin genes - six in the anole and one in the chicken.

There are many reasons to think that these genes are genuinely related to the ones responsible for our tresses. Human hair keratins are clustered in two specific areas of our genome, and those of the anole and chicken are found the same locations in theirs. All are flanked by the same genes and all code for proteins composed of similar amino acid chains.

Mammalian hair keratins are particularly rich in one amino acid in particular - cysteine. Cysteine allows individual molecules to form strong bonds with one another using molecules of sulphur as bridges. The sulphur bonds are the reason for the awful smell of burning hair, but they also make the filament both rigid and hard. 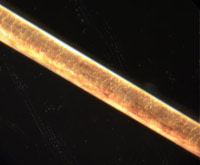 The hair keratins that Eckhart identified in the anole and the chicken are also loaded with cysteines, and by searching for similar proteins, Eckhart found a separate family of keratins that aren't related to any mammalian versions but work in the same way, using sulphur bonds to form hard and rigid structures. These were strictly a reptilian innovation that mirrors what our ancestors eventually came up with.

These results beg an obvious question: what are these genes doing in animals that lack hair of any kind? To answer that, Eckhart analysed several anole organs individually and found that their "hair" keratin genes are mainly switched on in the furthest tips of its toes, where its claws grow. They were claw keratins. Some of them were also weakly activated in the skin of its stomach, which suggests that they might be involved in producing scales.

Mammals too, have keratins in their nails, claws and hooves so it's likely that this trait is one we and reptiles have inherited from our last common ancestor. Indeed, Eckhart believes that this ancient creature already had a set of hair keratin genes, which it used to create structures such as claws, and possibly even scales. Reptiles today put those genes to the same uses, but mammals have rerouted them to create our unique furry coverings.