Natural selection does a handbrake turn for leggy lizards

The decades that make up a typical human lifespan can seem like vast stretches of time to us. But to the forces of evolution, they are mere temporary blips. Common wisdom has it that evolution occurs over geological timescales - thousands and millions of years. As such, evolutionary biology takes a lot of criticism for being a 'descriptive science', being less open than other fields to that fundamental aspect of science - experimentation. Though there are exceptions, those who study evolution must mostly be content to observe snapshots of life, either present or entombed in rock, and make inferences from there. 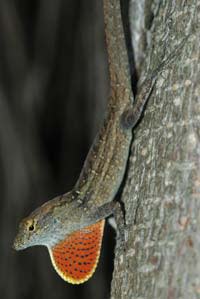 But this isn't always so. Occasionally, evolution happens at astonishingly fast rates, as epitomised by the case of the peppered moths. Today, canny scientists are on the look-out for situations where the evolutionary pressures that weigh upon a species change speedily and which are more amenable to testing. Jonathan Losos and colleagues at Washington University, St Louis, have found one such example in a small Caribbean lizard.

The brown anole lives in the Bahamas and spends much of its time foraging on the ground. Islands provide great opportunities for evolutionary biologists because invading species can drastically change or reverse the evolutionary pressures on the locals. The Bahamas are no exception to this - occasionally, the islands that the brown anole calls home are invaded a larger predatory species, the curly-tailed lizard.

Invasion of the lizards

Losos's earlier work had shown that these invasions caused the anole populations to head for the trees, abandoning their vulnerable land-based activities over a few generations. He spotted the signs of rapidly changing evolutionary forces or "selection pressures" ,and set about testing them by deliberately introducing curly-tailed lizards to islands containing brown anoles. 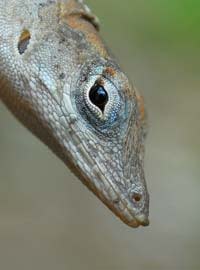 One year later and the percentage of brown anoles that Losos caught on the ground dropped from about 40% to under 10% in the islands invaded by the curly-taileds, but not in islands untouched by them.

In the first six months, the anole populations on invaded islands shifted towards individuals with longer legs, who were better at outrunning the predators. But six months later, and the survivors were those with much shorter legs, which allowed them to hide from curly-tails in narrow and irregular tree-top spaces.

Within a single generation, Losos had shown that the selection pressures acting on the anoles went through very quick reversals. As the lizards' behaviour changed and they started to leave the ground, traits that had once been gifts became hindrances. Natural selection, it seems, is a fickle master.

Over more generations, the persisting threat of the curly-tailed lizards will drive the evolution of shorter and shorter legs in the anole population. The endpoint of this process can be seen on other islands, where some lizards species have evolved very short legs indeed and become 'twig specialists'.

Studies like these help to show us the essence of a process that takes several of our lifetimes. In doing so, they greatly enrich our appreciation of how life on earth became as diverse as it is today.