Snakes have been around for nearly 100 million years and scientists have found many fossils of extinct species. But this astonishing specimen is different. This serpent is Sanajeh indicus. It issitting in a dinosaur nest and its coils surround three eggs and the body of a hatchling.

There are many reasons to think that this prehistoric tableau represented a predator caught in the act of hunting, rather than a mash-up of unconnected players thrown together by chance. The snake is perfectly posed, with its head resting atop a coil and its body encircling a crushed egg. All the pieces are very well preserved and very little of the snake, the dinosaur or the crushed egg have been deformed. All of this suggests that the animals were caught unawares and quickly buried in sediment.

The hatchling in question is a baby sauropod part of the dinosaur lineage that included the largest land animals of all time. It was probably a titanosaur, and being in India, that narrows things down to two known species - Isisaurus and Jainosaurus. The adults were formidable animals, 20-25 metres in length and protected by bony armour running down their backs. But even the largest dinosaurs must have hatched out of a small egg, and at that point, they were vulnerable. The hatchling that Sanajeh was about to dispatch was just 50 centimetres long, while the snake itself was measured 3.5 metres.

Despite this size discrepancy, the hatchling would still have been a substantial mouthful. Most modern snakes wouldn't have any problem with that. Their lower jaws can unhinge to give them a massive gape and their flexible skulls are made of bones that can move against each other.

Sanajeh was halfway towards developing these specialisations. It didn't have the fixed skulls and narrow gapes of the most primitiveof modern snakes, nor could its maw open quite as wide as today's record-breakers. Nonetheless, it could certainly swallow a sauropod infant and that ability earned Sanajeh inidcus its name. The words are Sanskrit for "ancient gape from the Indus". 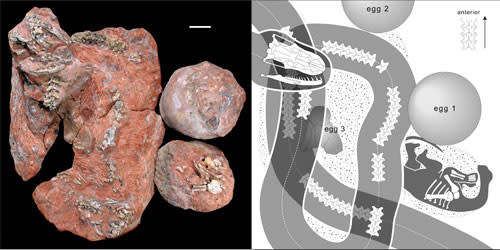 Sanajeh dates back to 67 million years ago but even after its bones were unearthed, it still took 26 years to reach the public eye. Dhananjay Mohabey first dug up the incredible specimen in 1984, near the Indian village of Dholi Dungri. He correctly identified the dinosaur baby and the remains of its egg but thought nothing more of it. The specimen's true nature only became clear 17 years later, when Jeffrey A. Wilson from the University of Michigan visited Mohabey and re-examined the specimen. To his amazement, he spotted the distinctive backbones of a serpent, intertwined around the baby.

Peering through the Geological Society of India's archives, the duo found a second block that had been collected at the same time but never been described. It snapped onto the first like pieces of a jigsaw, completing the loop of the snake's coils around the crushed dinosaur egg. Even then, it took years of negotiations with the Government of India Ministry of Mines before Sanajeh could be taken to Michigan for careful preparation and study, and before the Mohabey and Wilson could return to the original dig site to find more specimens.

They did eventually find two Sanajeh individuals at the same site, both associated with sauropod clutches. This suggests that their original drama wasn't a one-off production. At least in this area, this snake seems to have made a habit of feasting on would-be giants.

Perhaps the snakes are drawn to the nests by the presence of newly-hatched infants. After all, it's one of the few moments when they would actually dwarf their prey, a size advantage that would disappear within months. Alternatively, Wilson suggests that Sanajeh may even have deliberately crushed the egg to free the meal within. Today, the Mexican burrowing snake (Loxocemus bicolor)certainly sets a precedent for this - it breaks the eggs of Olive Ridley turtles before eating the contents.

Model by Tyler Keillor and photographed by Ximena Erickson