Tiger snakes are a group of extremely venomous serpents found all over the southern half of Australia, and on many of its islands. Some were cut off from the mainland by rising sea levels more than 9,000 years ago, while others were inadvertently introduced by travelling humans and have been around for less than 30 years.

When the snakes first arrive on an island, they find prey that are generally larger than they're used to on the mainland. That puts them under strong evolutionary pressure to have larger heads, in order to swallow larger meals. But by feeding snakes from different populations with prey of varying sizes, Fabien Aubret and RichardShine have found that the more recent immigrants solve the need for larger heads in a very different way than the long-term residents.

Young populations do it by being flexible. If growing tiger snakes from newly colonised islands are fed on large prey, their heads rapidly enlarge to cope with the sizeable morsels. This flexibility is an example of "phenotypic plasticity" and it doesn't involve any genetic changes.

But Aubret and Shine found that older populations lack this flexibility - they have larger heads from birth and the size of the prey they eat doesn't affect the way they grow. These adaptations are fixed in their genomes. In the heads of tiger snakes, Aubret and Shine have found evidence for a 67-year-old concept in evolution called "genetic assimilation", which has very rarely been tested and is often neglected.

Its name might conjure up images of science-fiction and DNA-stealing aliens, but genetic assimilation simply describes a means of adaptation. It was proposed in 1942 by Conrad Waddington, who suggested that species initially cope with fresh environments by being flexible - through plasticity. All species have a certain amount of variation built in to their developmental program, which they can exploit according to the challenges they face. In this case, the tiger snakes can grow larger heads if they encounter bigger meals.

Back in the 1950s, Waddington demonstrated this using fruit flies. He exposed developing flies to ether vapour and found that some developed a second thorax (the middle segment between the head and abdomen). By anyone's standards, that's a radical change, but one that was triggered by an unusual environment. Over time, Waddington selectively bred the double-thorax individuals and exposed each new generation to ether. After 20 rounds of this, he found that some flies developed a second thorax naturally, without being exposed to ether. The double-thorax trait, which was initially induced by the environment, eventually became governed by the fly's own genes.

It was a neat idea, but finding other natural examples has been very tricky. Aubret and Shine thinks that genetic assimilation tends to happen over such short timescales (geologically speaking) that you can only really detect it under unusual circumstances. And the spread of tiger snakes across Australia certainly fits that bill.

Aubret and Shine's experiments show that snakes from newly colonised areas had the greatest degree of plasticity when it comes to head size while those from the longest-colonised islands had the least. These differences become abundantly clear when you compare snakes from three populations.

The differences between the Trefoil and Carnac serpents are particularly interesting, because they suggest that the process of genetic assimilation can take place over a very short span of time, as others have predicted. It starts manifesting within just a few decades, even in animals like tiger snakes that only breed after their second or third birthday. This rapid pace could explain why it's very difficult to observe this process in the wild. 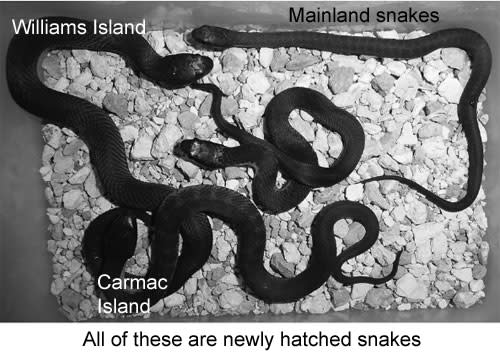