The era of genetic sequencing has revealed as much about the ties that bind us to other animals as the differences that set us apart. Often, comparing the genomes of different species shows that large changes in body size, shape and form are not mirrored by similar changes at a genetic level. New adaptations typically come about through small changes that redeploy existing genes to different ends, rather than raw innovation. 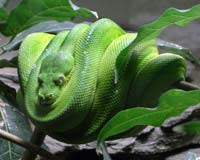 Snakes are an exception. A new study by Todd Castoe and Zhi Jiang at the University of Colorado has shown that the lifestyle of serpents is so unique that some of their core proteins, which vary very little in other animal species, have gone through massive changes. These bursts of evolution have been so dramatic that Castoe and Jiang refer to them as "evolutionary redesigns".

The proteins in question are all involved in aerobic metabolism, the breakdown of molecules like sugars and fats in the presence of oxygen to release energy. Large-scale changes in these proteins may have contributed to the incredible metabolic abilities of snakes, which are unique in the animal world.

Snakes can go for a long time without eating, but when food arrives, there is usually a lot of it. With the aid of suffocating coils, deadly venom and separable jaws, snakes can kill and eat animals far larger than their own bodies. Swallowing leaves the previously torpid serpent with a hefty meal to break down, and it does this by shifting its digestive processes into an extra gear.

Take a large python, for example. After feeding, its metabolic rate shoots up by 40 times and it goes through a drastic interior redesign. Within two days, its intestines and liver double in size, and its stomach, pancreas and kidneys follow suit. This expanded digestive system demands so much oxygen-rich blood that its heart becomes 40% larger. It's an truly singular strategy to feeding and this study shows that this uniqueness extends to the molecular level. 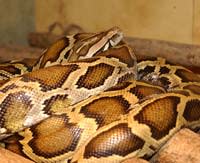 Aerobic metabolism depends on small structures called mitochondria. These miniature power plants are home to the biochemical reactions that provide cells with energy. Mitochondria contain small genomes of their own, which contain instructions for making 13 different proteins. To study these, Castoe and Jiang compared the mitochondrial genomes of several snake species, from the cottonmouth to the boa constrictor, along with close relatives like lizards. He used these comparisons to paint a picture of the changes that these genomes have picked up over time.

Only some of these genetic changes will affect the sequence of amino acids that comprise the 13 mitochondrial proteins. These proteins are usually so consistent across different species that for every change which alters an amino acid (a "non-synonymous" change), there are 8 that do not ("synonymous" changes).

But not in snakes. Castoe and Jiang found the number of non-synonymous changes in their proteins outnumbers the number of synonymous ones by 3 to 1, and the ratio of these two types is 25 times higher than in other vertebrates. Even for the most stalwart and unchanging protein of the lot - COI - this ratio is 60 times higher in most snakes.

The upshot is that mitochondrial proteins have gone through a rapid burst of extreme amino acid replacement. This has left snakes with unique versions of proteins that are otherwise known for their consistency in other animals. Even certain amino acids that are always the same in other vertebrates have been replaced in snakes. These changes happened fairly early on in their evolution and once they came into place, the genes resumed their static nature.

The COI protein provides a good case study. In snakes, 23 of its most crucial amino acids have changed in a unique way. When COI's amino acid chain is properly folded up, 17 of these form clusters in close proximity to one another. These clusters help to form the 'business end' of the protein. They are so important that changing any single amino acid within them is likely to deform the protein's overall structure and render it useless.

For this reason, the amino acids at these clusters rarely change. In snakes however, they appear to have co-evolved together to an inordinate and previously unheard-of extent. These simultaneous changes have allowed for a dramatic overhaul of the protein's overall structure, which reorganised several of its core functions including some which are vital for aerobic metabolism.

Why have mitochondrial proteins changes so radically in snakes, and not in other vertebrates? Castoe and Jiang suggest that you only have to look at the evolution of snakes to see a possible answer. Snake ancestors were lizard-like animals that took to a burrowing way of life. Their limbs were a hindrance and were gradually lost. Over time, their bodies elongated, and their right lung followed suit while their left lung became small and useless. They may have been rather a lot like the blind snakes that still live in the tropics today.

Some of these ancient snakes eventually returned to the surface. Their bodies grew bigger, their skulls became highly mobile and they developed the ability to drastically remodel their internal organs to cope with large and infrequent influxes of meat. Some even developed a host of toxic venom proteins.

With two such dramatic changes in body shape and physiology, it shouldn't be a surprise that snake mitochondrial proteins have seen similarly massive changes. The effects that these changes have had on the metabolism of snakes is still a mystery and one that can only be solved by further study of the biochemistry of these unique proteins. Such research may even help us to better understand the ways that mitochondrial proteins work in our own cells. Given how important they are, that is something that we are still remarkably ignorant about.