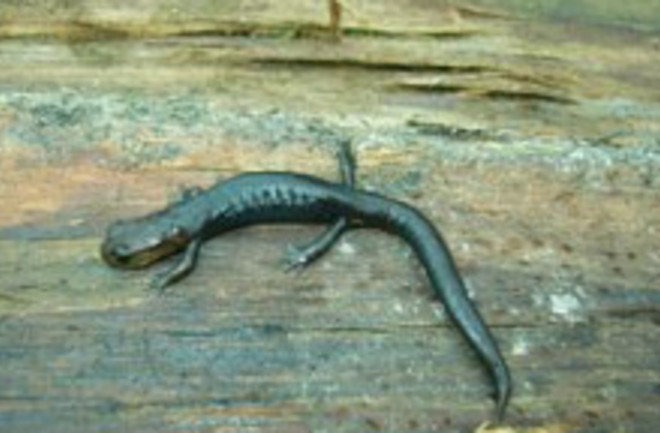 Over the past 30 years, the salamanders that used to thrive in the tropical cloud forests of Mexico and Guatemala have been disappearing, and until now no one had even noticed that the stealthy amphibians may be spiraling downward towards extinction. Back in the 1970s, biologist David Wake studied salamanders in the San Marcos region of western Guatemala, and he recently returned to the region to survey the current salamander population and compare it to his previous data. What he found shocked him, Wake says.

"Cold facts written on a piece of paper don't convey the impact on my psyche when I went there," he said. Species that could be seen 10 to 15 times an hour in the 1970s were "completely gone" [National Geographic News].

Since the 1980s biologists have raised alarms about worldwide declines in amphibians attributed to habitat destruction, disease and climate change, among other menaces [Science News].

Scientists studying dwindling frog populations have focused largely on chytrid, a fast-killing fungus, as the possible culprit, but Wake says that only a few of the salamanders he found on his recent trips showed signs of chytrid fungus. Instead, he blames global warming. Wake says that warming temperatures on the steep, forested slopes of Guatemala's volcanoes are forcing the salamanders up to higher to less hospitable elevations. Not all experts agree with Wake's conclusions, published in the Proceedings of the National Academy of Sciences [subscription required]. Karen Lips, an amphibian researcher, says that although chytrid fungus isn't currently endemic among the salamanders that Wake found, their population may have been decimated by the fungus in the past.

Lips believes that in the 1980s, an epidemic wave of chytrid fungus passed through Central America, when civil strife had kept researchers out of those countries [National Geographic News].

Regardless of the cause of the salamanders' precipitous decline, experts say that their loss would destroy the ecological balance of Central America's cloud forests. Some experts also

view today's amphibians, whose ancestors were the first land vertebrates, as sort of a canary in the coal mine, warning of future disaster for the animal kingdom. "If we are convinced there is something going wrong and these are canaries in the coal mine, what are you going to do about it? This is a problem," Wake said. "One major avenue is global climate change. That is clearly a factor" [Reuters].