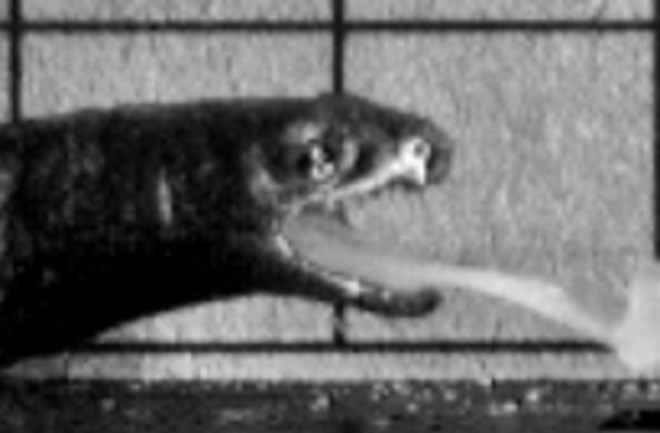 The most powerful animal in the world? It might be the salamander.

Some species of salamander can shoot their tongues out so fast that scientists suspect it can’t be done by the direct application of muscle power alone. The salamanders use their tongues to catch insects literally on the fly, and the evidence, published in February in the Journal of Experimental Biology by a group of researchers led by Stephen M. Deban of the University of South Florida, suggests that these amphibians owe their dead-shot abilities to a ballistic projection mechanism that powers their rapid-fire tongue thrusts: In effect the tongue launches from the mouth like an arrow from a bow. The salamander reels in its tongue once the prey is caught.

Deban and his colleagues photographed six species of plethodont salamanders, lungless animals that breathe through their skin. Using data from high-speed video recordings of 96 feedings, the researchers measured the speed of the salamanders’ tongue thrusts as the animals ate crickets, termites, and other bugs.

While the maximum speeds ranged from 6 to 15.7 miles per hour, the salamanders’ tongues achieved breathtaking acceleration—up to 450 g’s.

This is a feat impossible to achieve using only muscles. Instead, the researchers concluded, the animal must have a system composed of three parts analogous to the components of a crossbow: a muscle to produce energy over time, a spring to store the energy, and a latch to release the spring in an instant.

The scientists have identified the muscle, but the spring and latch remain to be definitively identified. The spring is probably tendonlike collagen tissue, and the latch that releases it is most likely another muscle, because the salamanders can vary the speed and distance as they snap at their prey.

“Salamanders are remarkable animals,” Deban says, “and I think they’re underappreciated. Frogs get all the attention.”

Go to the next article: 80. Robots Evolve And Learn How to Lie