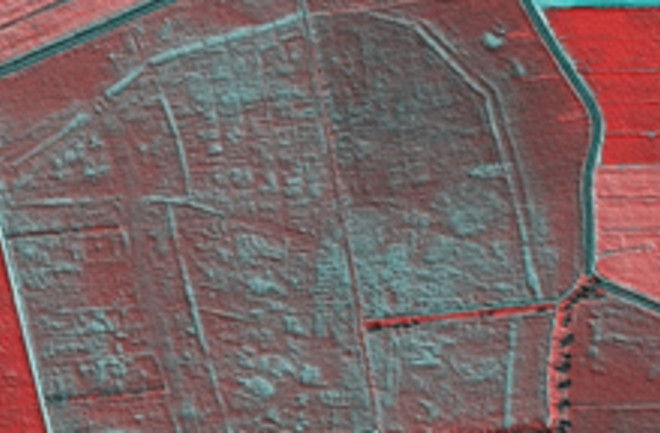 An ancient Roman city that was the predecessor of Venice has been rediscovered beneath croplands near the Venetian lagoon using sophisticated aerial imagery and some clever analysis. Researchers say they've found the harbor city of Altinum, which was once

one of the richest cities of the Roman empire. But terrified by the impending invasion of the fearsome Germanic Emperor Attila the Hun, its inhabitants cut their losses and fled in AD452, leaving behind a ghost town of theatres, temples and basilicas [Times Online].

Many of the city's ancient buildings were dismantled and the stones were carted away in the Middle Ages. The remaining foundations sunk back into the marsh, which was drained and turned into agricultural land in the 19th century. The new study, published in Science, is a result of aerial images taken in unusually dry summer of 2007, when the crops were suffering from drought. When the visible light and near-infrared images

were processed to tease out subtle variations in plant water stress, a buried metropolis emerged. The researchers discovered that the crops planted on the land were in different stages of ripening, thanks to differences in the amount of water in the soil [ScienceNOW Daily News].

Lighter crops traced the outlines of buildings--including a basilica, an amphitheater, a forum, and what may have been temples--buried at least 40 centimeters below the surface. To the south of the city center runs a wide strip of riper crops. They were growing above what clearly used to be a canal, an indication that Venice's Roman forebears were already incorporating waterways into their urban fabric [ScienceNOW Daily News].

The canal connects to the lagoon and cuts through the city, and was probably used to transport foreign goods from the harbor to the inland cities of Verona and Milan. Researchers say that this archaeological find is particularly valuable because the city was never built over.

“It’s extremely unusual for a town to go out of use like this and that is what makes it absolutely invaluable for achaeologists. It gives a full profile of what the town looked like without the imposition of modern infrastructure,” said Dr Neil Christie, a specialist in the Roman empire [Times Online].