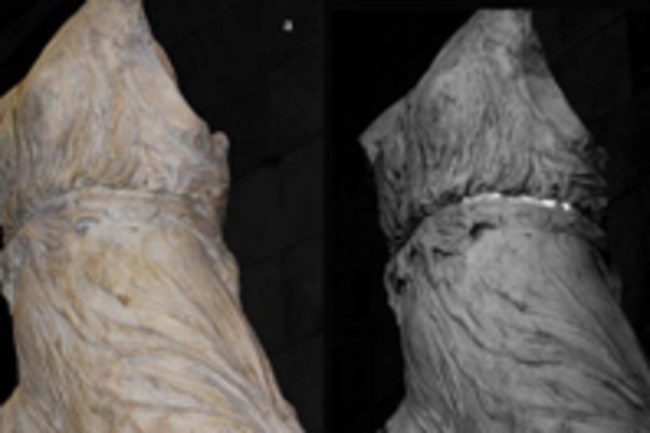 Although the image of the Parthenon often featured in history books and tourist brochures is stark white, a new imaging technique revealed that the ancient Greek structure wasn't always this way. In fact, parts of the building used to be painted blue, like many other sculptures from antiquity.

Pigments remain on other ancient Greek temples, and experts have long suspected that the Parthenon, too, was once brightly colored. But two centuries of searching for minuscule flakes of paint remaining on the Parthenon yielded no results, so it was impossible to confirm that the structure was not always white. To remedy that, a researcher at the British Museum in London created an imaging technique that reveals any remnants of a commonly used ancient pigment known as Egyptian blue, which was commonly used until the year 800 A.D. To use the technique, researcher Giovanni Verri

shines red light onto the marble, and any traces of paint that remain absorb the red light and emit infrared light. Viewed through an infrared camera, any parts of the marble that were once blue appear to glow [New Scientist].

Because only select areas on the statues and frieze light up, it lends further credence to the idea that the building was painted.

Egyptian blue has shown up on the belt of Iris, Poseidon's messenger goddess, and as a wave pattern along the back of Helios, god of the sun, who is shown rising out of the sea at dawn. It also appears as stripes on the woven mantle draped over another goddess, Dione [New Scientist].

Greek conservators have recently observed greenish flecks on remnants of the Parthenon frieze that are in Athens, but have not reported analyses of them [Nature News].

The Parthenon structures on which the blue pigment was identified are housed in the British Museum, and there is a long-running feud between the British and Greek government over which nation can claim ownership of the marble pieces. That means it might be awhile before the British Museum uses this new technique on parts of the structure that are still in Greece. Verri thinks the recently reported

frieze flecks could also be Egyptian blue, and is keen to examine them with his portable detector. But he adds that as diplomatic tensions have flared up again, now might be an insensitive time to offer [Nature News].

DISCOVER: The Cradle of Cash

Discoblog: Can an Eclipse Really Help Us Date Events in Greek Mythology?

Image: Trustees of the British Museum. The belt on a statue of the goddess Isis glows in an infrared image.