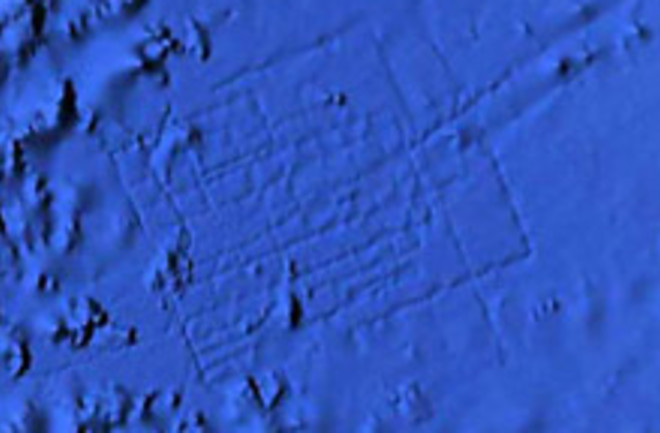 A man browsing through Google Ocean, the new program that allows for virtual exploration of the ocean's depths, briefly claimed to have found Atlantis, leading some to joke that a Google search really can find anything--even fabled cities that may never have existed. The man believed he had spotted the street grid of the ancient city that the philosopher Plato said sunk beneath the waves in 9000 BC.

But the exciting idea that a 11,000-year-old city could be located from a desktop computer was short-lived. Google quickly issued a statement explaining that the grid pattern was an artifact of the process used to collect data about the sea floor.

"Bathymetric (or sea floor terrain) data is often collected from boats using sonar to take measurements of the sea floor.... The lines reflect the path of the boat as it gathers the data. The fact there are blank spots between each of these lines is a sign of how little we really know about the world's oceans" [BBC News]

, the statement says. The excitement began when

the grid was spotted by aeronautical engineer Bernie Bamford as he browsed through Google Ocean. Bernie, 38, of Chester, said: “It looks like an aerial map.... It must be man-made” [The Sun].

However, further examination revealed that the grid was larger than the state of Connecticut; experts noted that it was pretty unlikely that an ancient civilization, no matter how advanced, could have built a walled city of that size. Plato described Atlantis as a marvelous island city carved partially from solid rock, and as a naval power with great riches. In his account the city was destroyed by earthquakes and floods, and finally sunk in "one grievous day and night." For centuries, scholars and the public have debated whether there's any historical truth to Plato's account of Atlantis. But while amateur explorers may not have found that prize, Google's statement notes that there's plenty to find through its virtual replica of our planet.

"[M]any amazing discoveries have been made in Google Earth including a pristine forest in Mozambique that is home to previously unknown species and the remains of an Ancient Roman villa" [BBC News].