Nemotodes, to Arms! Transgenic Corn Calls for Help Against Pests 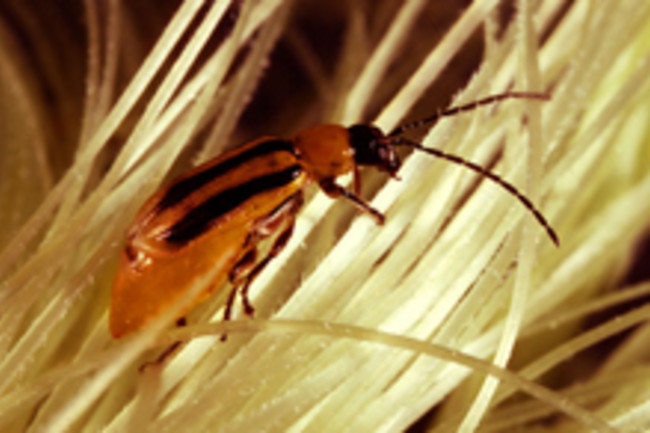 Scientists have created genetically engineered corn plants that resist a root-destroying larvae by emitting a chemical call for help, summoning a parasite that preys on the larvae. The larvae of the

western corn rootworm (actually a beetle) is considered the most destructive corn pest in the United States and plagues parts of Europe as well. Known as the billion-dollar bug, the rootworm is said to be responsible for crop damage and pest-control spending valued at more than nine figures [National Geographic News].

To fight the larvae without the use of synthetic pesticides, researchers created corn plants that release a chemical compound into the soil, which calls forth parasitic nematodes to come and infest the beetle larvae. In the study, published in the Proceedings of the National Academy of Sciences, researchers describe a field experiment in which they

interspersed transgenic and normal maize plants, and infested the plots with rootworm before releasing around 600,000 nematode parasites. Root damage by rootworm larvae was less in the transgenic maize, and 60% fewer adult rootworm beetles emerged from such plants [Nature News].

Currently, the transgenic corn emits the chemical signal constantly, as the gene responsible for making the compound is perpetually turned on, but the research team's

next step is to work out ways of making plants emit the compound only when under attack by pests [Nature News].

Researchers say they've actually restored a defensive mechanism that was once natural to North American corn plants, and that is still found in some European varieties. Lead researcher Ted Turlings explains that as agriculturalists focused on breeding faster-growing and sturdier crops, they may have may have inadvertently selected against plants with this natural defense. Ironically, Turling says, it took human meddling to restore the natural order.

"We used a controversial approach, with genetic engineering, to enhance a very much favored [among environmentalists] approach, which is biological control," Turlings said. "This is probably the first study to demonstrate that the two are compatible" [National Geographic News].