Coming Soon to a Grocery Near You: Genetically Engineered Meat 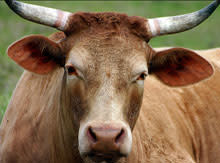 The Food and Drug Administration proposed rules today to regulate genetically engineered animals that are raised for food or to produce medications.

The agency would use its existing authority over animal drugs to regulate genetic engineering, the addition of genes to animals to improve food quality, build disease resistance or produce medicines for humans, the FDA said in a statement. Producers would have to demonstrate that altered animals, if intended for use as food, are safe to eat [Bloomberg].

The step is being viewed as yet another official vote of confidence in the safety of genetically engineered food products. Genetic engineering is already widely used in plants in the United States, where several government agencies oversee its use in agriculture. Crops like corn, cotton, and soybeans have been altered to be more resistant to pests or to endure high doses of weed-killers (like Monsanto's blockbuster Roundup Ready crops). The FDA has previously said that cloned animals and their offspring are safe to eat and don't require regulation, although squeamish consumers may put a damper on that market. It remains to be seen if consumers will accept genetically engineered steak and eggs. The FDA's proposed approval process for genetically modified animals would be more stringent than the existing process for altered plants, but the rules are still receiving mixed reviews from consumer and environmental groups.

"They are talking about pigs that are going to have mouse genes in them, and this is not going to be labeled?" said Jean Halloran, director of food policy for Consumers Union. "We are close to speechless on this." Nonetheless, Gregory Jaffe, who heads the biotechnology project at the Center for Science in the Public Interest called the FDA action a "good first step" [AP].

While the rules, which have been under consideration for about 15 years, are not

likely to surprise the biotech industry, their formal appearance after years of discussion is expected to energize a field whose commercial potential is huge but so far unrealized [Washington Post].

Companies are reportedly already developing pigs, cows, and goats that either produce substances in their bodies that are useful for human medicine, or else improve the yield of meat and milk for farmers.

The first animal to go through these regulatory steps would probably be an Atlantic salmon developed by Aqua Bounty Technologies of Waltham, Mass. It contains DNA from another type of salmon and from pout, another ocean fish, that allows the salmon to grow to market weight in 18 months instead of 30 [The New York Times].

Related Posts: Your Quarter-Pounder Just Might Have Come From a Cloned Cow (Indirectly)Europe Isn't Ready for Milk and Meat From Cloned Animals