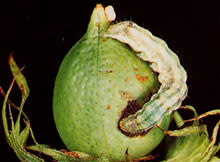 The introduction of genetically engineered cotton plants has had an unexpectedly broad effect on Chinese agriculture, according to a new study. The so-called Bt cotton plants that produce a chemical that kills the cotton bollworm have not only reduced the incidence of the pest in cotton fields, but also in neighboring fields of corn, soybeans, and other crops. The study, published in the journal Science [subscription required], found that the altered cotton plants kill the bollworm larvae before they can mature and move on to other crops.

The cotton bollworm, Helicoverpa armigera, is one of the most serious insect pests in Asia, attacking wheat, corn, soya beans, peanuts and vegetables as well as cotton. In the early 1990s, repeated bollworm outbreaks in China were barely contained. The heavy pesticide use that controlled them killed thousands of people each year, according to [biotechnology researcher] Huang Dafang [Nature News],

as many farmers didn't wear protective gear while they drenched their crops with chemicals.

Bt cotton appears to act as a dead-end trap for the pest, says [lead researcher Wu Kong-Ming]. "Bt cotton controls the whole population of cotton bollworm in northern China," he says. As a result, he says, "the ecological space for bollworm is getting smaller and smaller." Just as the bollworm threat is receding, however, another villain is gaining strength [ScienceNOW Daily News].

As farmers have reduced their use of chemical pesticides, another insect, the mirid, is infecting more cotton fields. Some researchers have suggested that the next goal should be to create genetically modified cotton plants that are toxic to mirids. Environmentalists who have long been wary of genetically modified crops say that the new study shows the unexpected consequences that one modified plant species can have on the rest of the ecosystem. Says Clare Oxborrow of Friends of the Earth

: "This study tells us nothing about the wider ecological impacts of growing Bt cotton, such as the impact on non-target species. It also fails to identify the impact on crop yields and the overall level of pesticide-use. This limited study must not be used to justify the cultivation of GM cotton – or any other GM crop" [Telegraph].

But such environmental concerns are unlikely to gain traction in China, as the government has recently embraced genetically modified crops and announced a $3.5 billion research and development initiative to bring new transgenic crops to the field. The government has said that such crops could combat the soil degradation and water shortages that many farmers face, and could ensure food security for its population of 1.3 billion people.

Related Posts: Coming Soon to a Grocery Near You: Genetically Engineered MeatWill Europe Give in to Genetically Modified Foods?