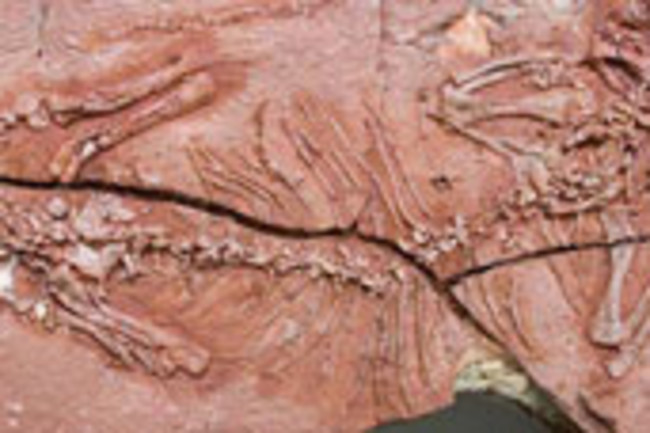 The oldest known tree-dwelling vertebrate lived 30 million years before the dinosaurs, scientists have found. The animal, known as Suminia getmanovi, had opposable thumbs and long hands, which would have allowed it to live in trees, according to a study published in the journal Proceedings of the Royal Society B. A team of researchers found that Suminia, which lived about 260 million years ago, had disproportionately long arms and slender, curved fingers that were well-adapted to grabbing tree branches. But perhaps most importantly,

one finger on each hand and foot was "opposed" to the rest, much like a thumb. "It's the first time in the fossil record that we've seen evidence of an opposable thumb," [said lead researcher Jorg Frobisch], adding that the creature was an early ancestor of mammals [BBC News].

The 12 well-preserved Suminia skeletons the scientists analyzed, which were found in Russia the 1990s, predate by 100 million years what was previously thought to be the earliest tree-dwelling animal. 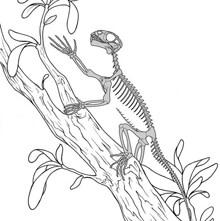 The specimens found at the Russian site included both children and adults, giving scientists a glimpse of the animal's skeletal development over time. And because the fossils were found in a group, scientists say Suminia might have been a social animal. But it's the fact that the animals seem adapted to living in trees that has proved the most interesting.

"It's a surprise, but it makes sense," Fröbisch said. "It was a new niche for vertebrates. There was food available and they avoided predators on the ground" [LiveScience].

The animal measured about 20 inches from the tip of its nose to the end of its tail, with its hands and feet making up almost 40 percent of its limbs. Despite its lizard-like appearance, the animal actually gave rise to modern mammals, not reptiles or birds; however, its opposable thumbs are structurally different from those of humans and other primates. The tree dwellers that lived 100 million years after Suminia were drepanosaurid reptiles, which sported a body structure similar to modern-day chameleons, although the two are not related, according to scientists. Suminia lived

in the Late Paleozoic era, just before the Mesozoic era, [which was] dominated by the dinosaurs. At the time, the Earth was an ice-free world with a single continent, and Suminia lived in the temperate and sub-tropical forests of its north — a climate similar to modern-day Florida — in what is now central Russia [CBC News]. The animals seems to have perished suddenly and then buried swiftly, perhaps due to a mudslide.

Planet EarthHow T. rex Came to Rule the World
Recommendations From Our Store