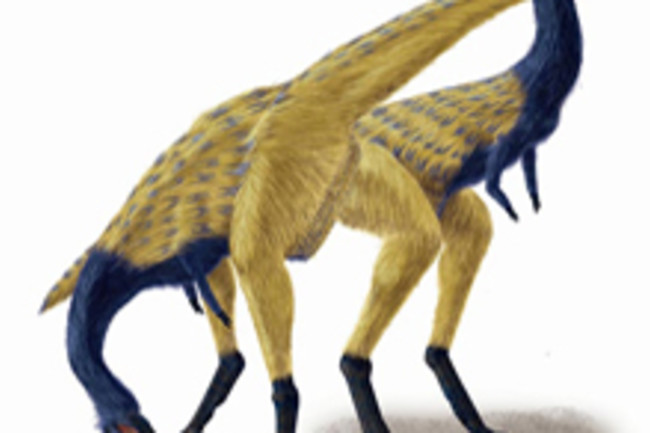 Most paleontologists believe that a group of dinosaurs evolved into today's birds, but in trying to understand that gradual process they've been bedeviled by some details. Yesterday, researchers announced that they may have solved one of those small conundrums. A fossilized dinosaur found in China appears to settle the matter of exactly how the bones in dinosaurs' feet evolved into the digits hidden in bird wings. The newly discovered ceratosaur belonged to a group of dinosaurs called theropods, which are thought to have given rise to modern birds and which included the mighty Tyrannosaurus rex. But unlike its T. rex cousin, this ceratosaur appears to have been a vegetarian. Says study coauthor James Clark:

"It's a really weird animal - it's got no teeth, had a beak and a very long neck, and very wimpy forelimbs.... Then when we looked closely at the hand, we noticed it was relevant to a very big question in palaeontology" [BBC News].

In the study, published in Nature, the researchers explain that theropod

hands and bird wings each have three bones that appear to have evolved from the digits on a common five-fingered ancestor. But the dinosaurs were thought to have retained the first, second, and third fingers, while birds kept the second, third, and fourth.... "This didn't really add up, because all the other evidence is suggesting that birds are related to dinosaurs," Clark said [National Geographic News].

The ceratosaur however, has four digits. Its fifth digit has already disappeared, while its first digit (analogous to a human thumb) is greatly reduced, suggesting that the ceratosaur's ancestors would lose that digit, too.

"So here you have a form that's reduced the first finger, and it is right in this period of transition in the evolution of theropods," Clark said [National Geographic News].

The researchers believe that the digits seen in the fossils of later theropods have been misidentified; they are really the second, third, and fourth digits, researchers say, but these inner digits evolved to look more like two fingers and a thumb. (For a fuller account of this research, see Carl Zimmer's blog, The Loom.) While the study appears to fill in a piece of the evolutionary puzzle with satisfying neatness, not everyone agrees with the authors' conclusions.

It is also possible that the ceratosaur does not play a part in the larger evolutionary story and evolved its unusual hands in response to a lifestyle that, because it was beaked and herbivorous rather than toothed and carnivorous, was quite different from that of other theropods. "I think it far more likely that this new animal just has an oddly reduced hand," says Kevin Padian [Nature News]

, a paleontologist who was not involved in the study. Related Content: The Loom: Of Birds and Thumbs has more on these findings 80beats: Dinosaur Handprints Show It Could “Hold a Basketball,” Not Dribble 80beats: To Attract Mates, This Dino May Have Shaken a Tail Feather 80beats: Stay-at-Home Dinosaur Dads May Have Hatched Eggs and Cared for YoungImage: Portia Sloan