How spitting cobras shoot for the eyes 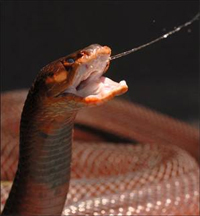 Bruce Young from the University of Massachusetts is antagonising a spitting cobra. He approaches, keeping outside of the snake’s strike radius, while moving his head from side to side. The cobra doesn’t like it and erects its hood in warning. Young persists, and the snake retaliates by launching twin streams of venom at him from forward-facing holes in its fangs. The aim is spot-on: right at Young’s eyes. Fortunately, he is wearing a Perspex visor that catches the spray; without it, the venom would start destroying his corneas, giving him minutes to seek medical aid before permanent blindness set in. It may seem a bit daft to provoke a snake that can poison you from afar, but Young’s antics were all part of an attempt to show just how spitting cobras make their shots. Their venom is a potent defensive weapon, but it’s also completely useless if it lands on the skin or even in the mouth. To work, the cobra must aim for the eyes. Just think about how hard that is. The cobra must hit a moving target that’s up to 1.5 metres away, using a squirt gun attached to their mouth. The fang is fixed with no movable nozzle for fine-tuned aiming. And the venom spray lasts just 50 milliseconds – not long enough to correct the stream after watching its arc. By taunting cobras from behind his visor, Young discovered their secret. The snake waits for a particularly jerky movement to trigger its attack and synchronise the movements of its heads in the same way. It shakes its head rapidly from side to side to achieve a wide spray of venom. And it even predicts the position of its target 200 milliseconds later and shoots its venom at where its eyes are going to be. There are several species of Asian and African spitting cobras, and Young had individuals of three – the red, black-necked, and black-and-white spitting cobras. Getting the snakes was straightforward enough; getting them to spit is another matter. It’s very difficult to provoke a cobra to spit at a stationary object – you need a moving target for the best results. That sounds like the sort of job that graduate students normally do, but Young stepped up to it himself. As he wryly writes, “To maximize consistency, the last author served as a target for all trials.” His visor was fitted with accelerometers that recorded his own head movements, while his colleagues Guido Westhoff and Melissa Boetig filmed the snakes with a high-speed camera. Both films were synchronised with a laser pulse and together, the team recorded data from over 100 spits. They found that a particular type of head wiggle provoked the snakes into spitting – not necessarily large or long-lasting, but always involving a jerky change of direction. This makes sense for the snake. At the moment when the target’s head changes direction, its movements are probably going to keep in the same direction for a short while. Also, to change direction, the head must briefly slow down before speeding up again, giving the snake more time to predict its future position. On average, the cobra starts spitting 200 milliseconds after such movements, which is roughly the same as a human’s reaction time between sight and movement. But if it takes that long for the snake to contract its venom-shooting muscles, it’s at a 200 ms disadvantage. How can it possibly gun down a moving target and avoid spitting into empty space? The answer is simple – even before the first droplets of venom emerge, the cobra is already taking aim. Around 65 ms before, it starts to waggle its head up and down, and from side to side, perfectly tracking the zig-zagging of its target’s face. When it actually starts to spit, it stops this synchronous bobbing and rapidly accelerates its head in the same direction as its target’s. The snake is compensating for its moving bull’s-eye, predicting where it’s going to be 200 ms in the future and ‘catching up’ to it well ahead of time. Young thinks that the cobra’s calculations would be accurate enough to hit the eyes if it focused its venom jets on a specific point. As it is, the snake increases the odds of hitting its target even further by wiggling its head from side to side while releasing its poisonous payload. The result: a massive chance of a direct hit, and a reeling animal that will think twice about approaching a spitting cobra again. Reference: J Exp Biol http://dx.doi.org/10.1242/jeb.037135More on snakes: