How drug-resistant flu took us by surprise

In the film Slumdog Millionaire, Jamal Malik, a teenager from Mumbai’s slums, wins India’s version of Who Wants to be a Millionaire? As the film continues, flashbacks reveal how events in Jamal’s life inadvertently furnished him with the knowledge to answer all fifteen questions and net the top prize. The film illustrates how some of life’s most useful events have no apparent value at first; their true worth lies in allowing us to exploit future opportunities. It’s a lesson that evolution also teaches, time and time again. One such lesson has just been narrated by Jesse Bloom from the California Institute of Technology and stars the H1N1 flu virus. One of our main defences against this dangerous infection is the drug oseltamivir, better known as Tamiflu. The drug was generally effective against the H1N1 swine flu from last year’s pandemic, but it doesn’t work against seasonal strains of H1N1 that naturally circulate among humans. In 2007, the first signs of resistance emerged and within a year, virtually all strains of seasonal H1N1 were shrugging off Tamiflu. And we’ve only just worked out why this happened. Tamiflu binds to a protein called neuraminidase, which covers the surface of the flu virus and allows it to break free from its host cell. Tamiflu worked by gumming up the business end of this protein, turning a host cell from a virus factory into a prison. The infecting viruses can replicate all they like but they can’t get out. But resistant strains have a mutation in their neuraminidase gene, which changes a single amino acid in the protein’s sequence. This changes the structure of the protein so that Tamiflu no longer sticks to it. But this mutation, known as H274Y, is a double-edged sword. It allows the virus to shrug off Tamiflu, but it also changes the structure of neuraminidase so that the virus has trouble shunting it to its surface. The result is a strain, with half the necessary amount of neuraminidase – it’s a less inviting target for Tamiflu but it’s also weak and feeble. When the first H1N1 viruses with this mutation were discovered in 1999, they were rubbish at infecting the cells of mice or ferrets. Scientists thought that this mutation was “unlikely to be of clinical consequence”. Clearly, they were wrong. The mutation spread like wildfire across the world, effectively neutralising one of our main weapons against seasonal flu. Now, Bloom has discovered how this supposedly crippling mutation conquered the globe – it had help. Bloom showed that some strains of H1N1 had already acquired two other mutations that eventually compensated for the harmful effects of the H274Y mutation. When these “permissive mutations” first arose, they were fairly innocuous and may not have conferred any obvious advantages in their own right. But they sowed the seeds of resistance, allowing the virus to eventually pick up the H2747 mutation at no cost to itself. Like the random pieces of trivia in Slumdog Millionaire, these inoffensive events paved the way for a big future win. Bloom sequenced the neuraminidase protein from a variety of seasonal H1N1 strains since 2006 and built up a family tree that charted which mutations they developed, and in what order. Two of these (V234M and R222Q for the technically minded) corrected the problems caused by H274Y, shifting the protein’s structure so that the right amount ends up at the virus’s surface. The combination of all three mutations produced a strain of flu that resisted Tamiflu and was just as good at infecting cells as normal strains. Compared to a strain that only had the resistance mutation, the triple-mutant grew 100 times better in cell cultures. 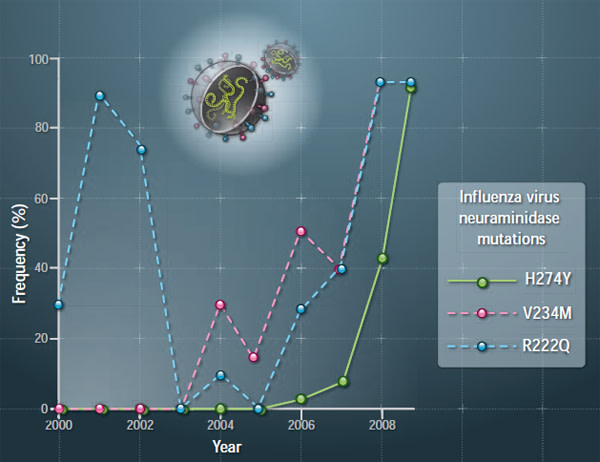 The story of H1N1 teaches us an important lesson. It means that some strains of virus are inherently better than others at evolving drug resistance and other important traits. Perhaps some mutations are already out there that could eventually pave the way for more virulent viruses, or ones that could jump the species barrier from other animals. For now, we know of two permissive mutations that allowed H1N1 to pick up Tamiflu resistance. In the future, it would behove us to monitor other lineages of flu – particularly the recent pandemic strains – for these same changes. If resistance crops up, it will most likely do so in these strains. Reference: Science http://dx.doi.org/10.1126/science.1187816Infographic: from Science More on flu: