Of the different types of flu virus, influenza A poses the greatest threat to human health and at any point in time, about 5-15% of the world's entire population are infected with these strains. Together, they kill up to half a million people every year and the death toll rises sharply when pandemics sweep the globe. 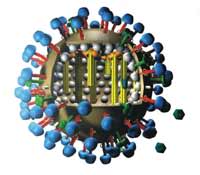 Today, two papers published in Nature and Science shed new light on the origins of these epidemics. By prying into the private lives of flu viruses, the studies provide fresh clues about the birthplaces of new strains, their flight plans around the world and the locations of possible 'viral graveyards'.

The findings could help health organisations to design better strategies for monitoring the emergence of new strains and selecting vaccines that will do the most good.

All influenza A viruses are deceptively simple. They all contain eight gene segments that code for just 11 proteins. Two of these - haemagglutinin and neuraminidase - are of particular note, for they help the virus stick to a host cell and are used to distinguish between different types. The H1N1 subtype, for example, was responsible for the 1918 'Spanish flu' pandemic, and H5N1 is the avian flu subtype that so concerns us today. However, the dominant subtype is currently H3N2, which first found its way into humans in 1968 in a form that has since become known as 'Hong Kong flu'.

Understanding how, when and where new strains of flu evolve is a complicated business, especially because existing strains are liable to mix and match to form new ones. This process, known as 'antigenic shift' or 'reassortment', often happens when viruses of different types infect the same cell and swap gene segments between them.

To understand the evolution of influenza subtypes on a large scale, Andrew Rambaut from the University of Edinburgh, together with an international team, analysed over 1,300 samples of H1N1 and H3N2 collected across a 12-year period from New York State and New Zealand. Both subtypes become more common during the winter months, but the forces that drive these seasonal cycles are unclear.

Rambaut found that at the start of each winter season, there is a sharp rise in the genetic diversity of H3N2 viruses, followed by an equally stark bottleneck at winter's end. As expected, the timing of these evolutionary peaks in the Southern Hemisphere is offset from those in the North by six months. The patterns of diversity in the two subtypes are also interwined. H1N1's genetic diversity only peaks strongly in years when that of H3N2 peaks weakly, suggesting that the dominant virus either causes a herd immunity that protects people against its rival, or simply outcompetes it.

Rambaut suggested two possible explanations for the fact that viral diversity repeatedly peaks in winter epidemics, despite going through summer lulls. The first is that chains of infection manage to linger between epidemics. It's an unlikely theory because each year, there is a good chance that random events will cause strains to go extinct, which makes their continued survival across the years very improbable.

The second theory is that viruses 'import' genetic diversity from more stable reservoirs in other parts of the world, and this is better supported by genetic evidence. Typically, family trees of flu samples show that viruses taken from different seasons in the same location show little direct relationships to one another. That argues against the idea that strains persist at a local level, and suggests that they are instead 'seeded' by a source somewhere else in the world.

Rambaut proposes that the tropics act as a large melting pot for influenza evolution, where new strains emerge and are exported to temperate regions, where they fuel seasonal epidemics. In these tropical 'sources', the population of both human and animal hosts is very large and infections can spread indefinitely. As such, natural selection can shape the evolution of new strains more efficiently than in the temperate 'sinks' with their seasonal bottlenecks. 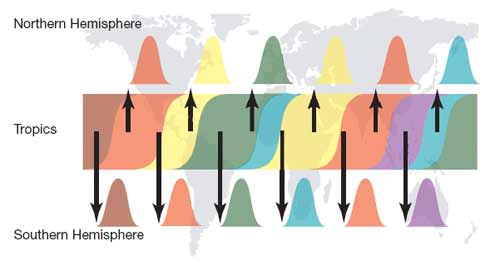 This theory could explain other puzzling characteristics of influenza evolution, like the fact that the haemagglutinin protein often changes substantially between epidemics but changes very little within each separate one.

Rambaut writes that it's possible that "tropical regions generally" represent ideal source populations for flu viruses and that it will be necessary to study more samples from tropical regions to test this idea. As luck would have it, a second group have done just that and they have managed to pinpoint the crucible of flu evolution even more precisely.

From east to west

Colin Russell from the University of Cambridge, heading another international group, focused on the virus's haemaggluttin protein (HA), the main target of our own immune systems. His team followed the worldwide evolution of H3N2 strains by analysing the immune reaction triggered by 13,000 samples, taken from six continents over a five-year period.

The team found that during this time, newly emerged strains showed up in East and South-East Asian countries about 6 to 9 months earlier than they did in other parts of the world. On the other hand, the viruses' travels to South America were very delayed and they took a further 6 to 9 months to reach it. The researchers also sequenced part of the HA protein (image right) in about 10% of their samples and the genetic relationships between these samples confirmed that new strains follow the same east-to-west route. 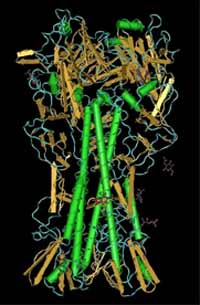 As before, this pattern can be explained in two ways involving local persistence or external seeding. The local persistence one is more complicated, for it suggests that new H3N2 strains emerge independently around the world as a result of similar evolutionary pressures. Like Rambaut, Russell denounced this idea. He used the sequenced HA samples to build a virus family tree, showing how different strains were related to one another. The tree revealed that strains were always descended from those from other parts of the world, rather than those from earlier local epidemics.

Like Rambaut, Russell agrees that new viruses are 'seeded' from a specific source, but his data contradicts Rambaut's suggestion that this source is the entire tropical belt. For a start, South America always carried flu strains that were less advanced than those of Asia, and it never gave rise to its own independent flu lineages. However, Russell admitted that there isn't enough data from Africa to rule it out as a potential source of flu.

However, it is impossible to narrow things down even further. Some researchers have suggested that Southern China is the sole source of new flu strains but Russell found that no single country in this part of the world consistently shows more advanced viruses than those of their neighbours. New strains often emerge in countries other than China, although for some reason, Malaysia, Thailand and Japan contribute less than their expected share of new strains.

Russell suggests that this part of the world seeds the planet's flu population because the viruses find it easy to circulate continually. East and South-East Asian countries have very variable climates and go through their rainy seasons (when influenza infections are most common) at different points of the year. So these countries go through epidemic cycles just as more temperate regions do, but the timings of their peaks and troughs overlap to a massive extent.

As a result, flu viruses can jump from one country's epidemic to another, creating a continuous network of infection. Russell found that the viruses within this network are fairly cliquey and are almost never seeded by strains coming in from other parts of the world. Instead, this network exports new viruses to other countries, a job made easier by Asia's strong trade connections to Europe, North American and Australasia. (I bet that somewhere on the Internet, an idiot will interpret this as a Communist plot to overthrow the US.)

South America, on the other hand, has little trade with East and South-East Asia, which may explain why it lags behind so much in terms of flu evolution. To get there, viruses need to make a stopover in North America and Europe first. In fact, South America as a whole may represent an evolutionary dead-end for H3N2, a sort of viral graveyard.

Knowing how flu viruses evolve is one thing, but the real challenge is to be able to predict these patterns in the future. Russell's work was supported by the WHO's Global Influenza Surveillance Network, which monitors the world's influenza population and meets twice a year to decide which strains from three subtypes (including H3N2) will be included in the flu vaccine for the next season.

Russell recommends that the WHO keep the East and South-East Asian flu network under increased scrutiny. Close inspections of this influenza hotspot will help us to detect new strains as they emerge and determine which are most likely to seed the rest of the world. While the existing vaccine is very successful, a better understanding of our enemy will allow us to stockpile even more appropriate weapons. These initiatives will be even more effective if they pay attention to the entire influenza genome, as Rambaut did, rather than the HA protein in isolation.

Images courtesy of Nature and Science