Origins of the swine flu pandemic

In the time since the words "swine flu" first dominated the headlines, a group of scientists from three continents have been working to understand the origins of the new virus and to chart its evolutionary course. Today, they have published their timely results just as the World Health Organisation finally moved to phase six in its six-tier system, confirming what most of us already suspected - the world is facing the first global flu pandemic of the 21^st century.

The team, led by Gavin Smith at the University of Hong Kong, compared over 800 viral genomes representing a broad spectrum of influenza A diversity. The viral menagerie included two samples of the current pandemic strain (the virus formerly known as swine flu and now referred to as swine-origin influenza virus (S-OIV)). Also in the mix were 15 newly sequenced swine strains from Hong Kong, 100 older swine strains, 411 from birds and 285 from humans.

The team used these genomes to build a viral family tree that shows the relationships between the strains and dates their origins. They found that S-OIV was borne of several viruses that circulate in pigs, with contributions from avian and human strains. The virus made the leap to humans several months before we twigged to its presence. It was spreading right under our noses, undetected because of our lack of surveillance of flu viruses in pigs.

This beautiful diagram (enlarge it) charts the origins of the current outbreak. Each set of eight lines and arrows represents the genome of the influenza virus, which consists of eight separate strands of RNA. The bold dots on the far right represent the strain that currently troubles us. Trace back the lines of its ancestry and you can see that every one of its eight genetic segments comes from a lineage of flu that had firmly established itself in pigs for at least a decade before the current outbreak. Go back further and you can see that some of the segments have their origins in human H3N2 subtypes and bird H1N1 subtypes in the 70s and 80s. 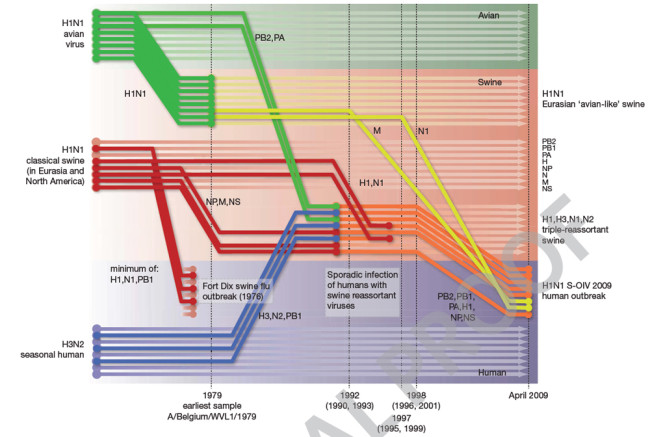 This fits with what we already knew about the virus. Swine-borne strains of H1N1 influenza have been around since at least 1930. It spent many decades as a relatively stable virus but in 1998, its genetic material mingled (or "reassorted") with that from bird H1N1 and human H3N2 subtypes.

This new virus - a "triple-reassortant" - established itself in North American pigs and kicked off a chain of further reassortments with other pig lineages. The result: a growing family of H3N2, H1N1 and H1N2 viruses, all mixing genes from human, bird and swine strains. Elsewhere in the world, similar events were taking place. In Europe, a bird H1N1 was detected in Belgian pigs in 1979 and also reasserted with human H3N2 viruses and other pig strains.

Smith's analysis also reveals striking similarities between the current S-OIV epidemic and the 15 swine strains newly sequenced from Hong Kong. These Asian viruses included a variety of different types that were happily reassorting with each other, and some of their genes had more in common with those of the S-OIV strain that any previous sample. This strongly backs up the idea that the S-OIV's precursors were indeed infecting pigs but more worryingly, it suggests that these predecessors spread over large swathes of the globe. Based on Smith's analysis, the common ancestor of S-OIV and its closest known relatives was infecting pigs between 9 and 17 years ago.

Domestic pigs are viral networking events - living melting-pots where existing strains can meet, mingle and swap genetic material. The trade of live pigs between Europe, Asia and North America only adds to that, and provides the new viruses with an easy international travel plan. Indeed, all the three pandemics of the 20^th century seem to have been produced by a series of reassortments in pigs and humans, and emerged some years before they were formally recognised - a trend that has repeated itself with S-OIV.

The new triple-reassortant strains hadn't gone totally undetected. Oddcases of human infection have cropped up since 2005 and we already knew that the virus could be transferred from pigs to humans. The CDC noted it as a "nationally notifiable disease" in 2007. And yet, we failed to keep an eye on swine flu strains in the rigorous and systematic way that we watch out for their human counterparts. As Smith writes, "the lack of systematic swine surveillance allowed for the undetected persistence and evolution of this potentially pandemic strain for many years."

There's one silver lining to Smith's analysis - among the pandemic sequences, the team found no traces of amino acids that, in other flu strains, have been linked to adaptation to human hosts or virulence (ability to cause disease). That's gels with the fact that the current outbreak represents a recent jump to humans, and the relatively mild symptoms that we're seeing among the infected.

But even here, Smith extends a word of caution. He did detect some signs that the virus's molecular evolution is speeding up slightly. He compared the S-OIV genes with those from other swine flu strains to work out how fast they are changing. In particular, he wanted to see how many mutations in the viruses' genes actually change the amino acids of the proteins they encode. Such mutations are called "non-synonymous", while those that don't influence amino acid sequences are "synonymous".

Smith found that all the genes from the current outbreak strain have a higher proportion of non-synonymous changes than genes from other swine flu strains. That could simply be because our eyes are now peeled for S-OIV and we're more likely to pick up mutations that cause mild ill effects but would normally disappear before they're detected. The more worrying interpretation is that the non-synonymous mutations reflect adaptations to a new host - ourselves.