Round peg, square hole - why our bird flu drugs are a fluke

The world's nations are stockpiling two drugs, Tamiflu and Relenza, to counter the threat of a bird flu pandemic. These drugs work by blocking a key protein that allows the virus to spread. But two years ago, a study revealed the structure of this protein and in doing so, shown that both Tamiflu and Relenza only work through a fortunate fluke. 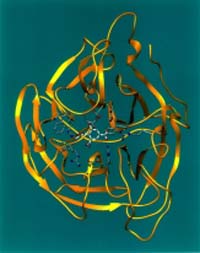 The threat of bird flu is looming large in the minds of the public, scientists and politicians alike. So far, 241 people have died of the disease across 12 countries. But the real worry is that that the virus could mutate into a form that passes from person to person, triggering a worldwide pandemic similar to the 1918 outbreak that killed millions.

The pandemic threat has started a race to produce drugs that can quickly halt the progress of the virus in infected patients, reducing the chances of mutation and transmission. Two have been created - oseltamivir, better known as Tamiflu, and zanamivir, also known as Relenza. But worrying reports of resistance to these drugs are starting to emerge and there is a growing need for newer and better weapons. And as always, to find the ideal weapon, you must first know your enemy.

There are many types of bird flu, but the strain that has us concerned is called H5N1. The N stands for neuraminidase, a protein that allows newborn viruses inside the host to break free and spread to new cells. There are nine types of neuraminidase that fall into two distinct sub-groups; N1 belongs to group 1. 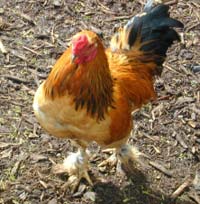 Tamiflu and Relenza were designed to block the action of neuraminidase by attaching to their 'active site' - this is the business end of the protein and the key to its activities. Blocking the site stops the spread of the virus, and contains the infection.

Even though these drugs are used to fight H5N1, they were designed to block the active sites of group-2 neuraminidases. Scientists had found that the active sites of both group-1 and group-2 proteins shared very similar sequences of amino acids, and understandably assumed that they had the same structure and that the correctly-shaped drugs would work against both groups.

But Rupert Russell at the MRC National Institute for Medical Research found that they were very wrong. His team deciphered the structures of the group-1 neuraminidases, N1, N4 and N8 and found that their active sites are very different to those of their group-2 counterparts, which were already known.

The differences are so substantial that it's very strange that our drugs should work at all. As it happens, we have been very lucky. In a remarkable fluke, Tamiflu causes the active sites of the group-1 proteins to change shape to match those of the group-2 proteins it was manufactured against. The effect is like trying to fit a round peg into a square hole, but ramming it in so that it clogs up the hole anyway.

With the real structure of the N1 active site in hand, we now know the true face of the enemy. Scientists can begin designing a new wave of drugs that will be even more effective against the looming bird flu threat.

But the real moral of this story is that we must not be careless in designing new drugs. The mistake was in assuming that similar active site sequences implies similar active sites. But Russell's experiments have shown that even small changes other parts of the protein can cause the active sites to take on very different shapes, reducing the effectiveness of any counter-measures. We have been very lucky with Tamiflu, and we cannot afford to rely on good fortune again.