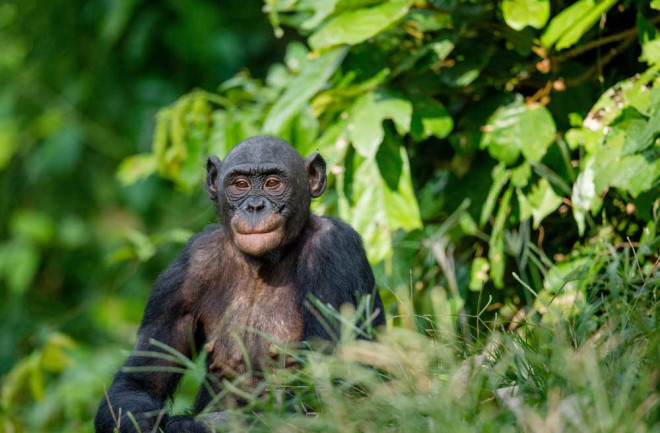 Most scientists think language emerged in stages, as our ancestors evolved the necessary adaptations for speech. (Credit: Sergey Uryadnikov/shutterstock)

Humans have language and other animals don’t. That’s obvious, but how it happened is not. Since Darwin’s time, scientists have puzzled over the evolution of language. They can observe the present-day product: People today have the capacity for language, whether it be spoken, signed or written. And they can infer the starting state: The communication systems of other apes suggest abilities present in our shared ancestor.

But the million-dollar question is what happened in between. How did we transition from ape-like communication to full-fledged human language?

Most scientists think this happened in stages, as our ancestors evolved the adaptations needed for language. In earlier stages, human ancestors would have used a kind of protolanguage — more complex than ape communication, but lacking elements of modern language.

But what exactly was this protolanguage like? That’s where we hit considerable debate. Some researchers argue that our ancestors sang before they spoke. Others claim protolanguage was dominated by pantomimed gestures — a society built on charades.

Before trying to explain how language evolved, we need to clarify exactly whatevolved. We must define what language is and how it differs from the communication abilities of our closet evolutionary relatives, the great apes.

In human language, arbitrary sounds and signs represent specific words, which can be learned, invented and infinitely combined within grammatical structures. We can talk about anything we can think — plans, pancakes, politics — including what is not the case: “I have no plans to make pancakes or enter politics.” And many statements have specific meanings that are context dependent. For instance, “How are you?” can be a greeting, not a genuine inquiry. Language allows us to bond with others, or to deceive them. And although our native tongue is not innate, toddlers pick it up without conscious effort.

These qualities make language an extraordinary communication system found exclusively in humans. But the system can be dissected into components, or traits necessary for language. And these emerged at different times in our evolutionary past. Traits shared with other apes likely existed millions of years ago in our common ancestor. The traits we don’t see in other apes probably only emerged in hominins, the evolutionary branch that includes humans and our extinct relatives.

There are at least three elements of language only present in hominins:

First, is a fine-control over our vocal tracts. Other apes are likely born with a more limited repertoire of vocalizations. The difference comes down to how our brains are wired: Humans have direct connections between the neurons controlling our voice box and the motor cortex, the region of our brain responsible for voluntary movements. Brain scans show these connections are lacking in other primates.

Next is our tendency to communicate for the sake of communicating. To encapsulate this, biologist Fitch used the German word Mitteilungsbedürfnis, “the drive to share thoughts.” Whereas chimps use a finite set of calls and gestures to convey the essentials — food, sex and danger — humans talk to bond and exchange ideas, and strive to ensure we’re understood. Most researchers attribute this difference to an idea called “theory of mind,” the understanding that others have thoughts. Chimps demonstrate more limited theory of mind, whereas humans know that other humans think things — and we’re constantly using language to uncover and influence those thoughts.

So hypotheses for language origins must explain (at least) these three traits: precise vocal learning and control, overtly social communication and hierarchical syntax.

Now for the fun part: How did these components emerge, and eventually converge, to constitute language?

There are several prevailing views, which differ in terms of the evolutionary pressures favoring language adaptations, the order these adaptations arose and the nature of protolanguage along the way.

Some believe precise vocal control and learning was the first language trait to emerge in hominins — and not for speaking, but for singing. This idea of musical protolanguage comes from Darwin himself and has been modified over the years by different researchers. During this hypothetical singing stage of human evolution, our ancestors’ survival and/or reproductive success would have depended on serenading, in the context of maintaining social bonds, attracting mates or soothing infants. (Given my repulsion for acapella, I’d be evolutionarily unfit for this phase).

An alternate view envisions protolanguage characterized by gesture and pantomime. In this case, syntax and social communication would have preceded vocal prowess. The strength of the gestural hypothesis is that our closest relatives, chimpanzees, exhibit more controlled and variable gestures (over 70 and counting) than calls (4 types and more hard-to-distinguish subtypes). The weakness of this view is, it’s unclear why or how language became so speech-dominate.

Others, convinced that hierarchical syntax emerged last, propose a protolanguagewith symbolic words, but no complex, nested sentences. According to this view, our pre-linguistic ancestors talked more like babies — “Water! Thirsty!” — or pop-culture’s image of cavemen — “Me hunt mammoth. Me want sex.”

These models aren’t mutually exclusive. Some researchers integrate them into successive stages, associated with different hominin species. Perhaps between 2 and 4 million years ago, Australopiths like Lucy were gifted singers. By 1.9 million years ago Homo erectus combined gestures and expressive vocalizations into group rituals. And hierarchical syntax only emerged some 200,000- 300,000 years ago with the appearance of our species, Homo sapiens.

This might all sound like speculation (and some scientists dismiss it as such, e.g. this commentary or Chomsky’s quote here). But many researchers beg to differ: Scientific models of language evolution derive from evidence gathered in comparative biology, neuroscience, genetics, linguistics and paleoanthropology. This includes data on how animals communicate, the brain and gene systems underlying language, the complexity of artifacts in the archaeological record and changes in anatomy and brain size, preserved in fossils. Most importantly, the models make predictions for future research — what should be found if that’s really how language origins went down.