New Evidence for How Languages Spread 10,000 Years Ago

The ancestral tongues of Japanese, Korean and mainland Asian languages may have followed the dissemination of agriculture. 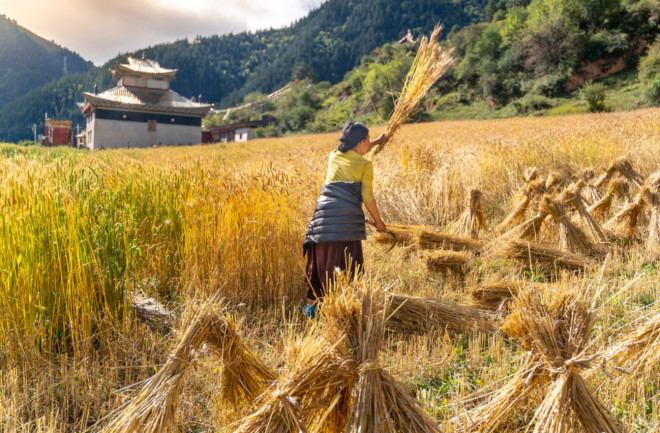 While the modern languages found in Mongolia, Korea and Japan may not have much in common today, evidence drawn from linguistics, archaeology and genetics have combined to reveal a 10,000-year journey through eastern Asia. Some researchers now say the spread of these languages tracks closely to the development and proliferation of crops like millet and rice.

“The root of this language family lies exactly at the beginning of agriculture,” says Martine Robbeets, a linguist at the Max Planck Institute for the Science of Human History in Germany.

The very existence of a Transeurasian language group has been controversial since scholars first proposed that the language groups of Japanese, Korean, Tungusic, Mongolic and Turkic may stem from a single, ancient language source. For decades, researchers argued over whether similar language roots are due to linear evolution or whether they simply represent words borrowed from other languages — and fierce debate remains on this topic even today.

Robbeets, long on the side that believes these languages share a common ancestor, turned to evidence beyond linguistics. As part of a study published last month in Nature, she and a group of international researchers split into three major teams, each examining different lines of evidence: linguists, archaeologists and geneticists. Each team operated independently from the others to avoid influencing one another’s results.

For the linguistics team, a difficult task lay ahead. The oldest written sources of the Japanese and Turkic groups, for example, only date back to roughly the eighth century A.D., while Korean doesn’t appear in written sources until the 15th century when their alphabet was invented. To examine the roots of these languages, the researchers had to work backwards through time, identifying the residues of words and sounds that remain similar between language groups today.

Read More: How Do Archaeologists Crack the Code of Dead Languages?

They built a database of similar words and sounds, then created a model to generate a family tree that estimated the timeline of different branches of Transeurasian languages. The researchers paid special attention to works that were involved with fermentation, millet cultivation, and weaving and textile production. These models showed that the languages’ common ancestor dates to more than 9,000 years ago in the West Liao River, in present-day eastern China near the border of North Korea.

“I found that the main objections against Transeurasian could be addressed. There is basic vocabulary, there are regular sound correspondences, these languages have morphology in common,” Robbeets says. “Our evidence is growing proof in the sense that not everything is borrowed. Some words seem to be a residue of a common ancestral language that we call proto-Transeurasian.”

At this point, the questions became “who were these people?” and “what was happening about 9,000 years ago in the West Liao River region?”

Archaeological evidence shows that the period represented the beginning of millet agriculture. Researchers analyzed some 255 archaeological sites, dating to the end of the Stone Age and the Bronze Age in Korea, Russia, Japan and northeastern China. The results — which included radiocarbon dating of ancient crop remains — revealed that after appearing in the West Liao region, millet began to appear in the archaeological record first in Korea some 6,500 years ago, then in the far east of Russia about 5,000 years ago. “The date and the spread of millet farming seem to match the spread of the languages,” Robbeets says.

Rice entered the Liaodong area near the present-day border of China and North Korea about 3,500 years ago, likely coming from farther south in the Yangtze River region. It then spread through Korea and eventually Japan, where it arrived about 2,900 years ago alongside millet, Robbeets’ study found.

But Alexander Vovin, a linguist at the School for Advanced Studies in the Social Sciences in France, contends that language doesn’t always spread with agriculture. He points to the case of the Finno-Ugric language group, which includes modern Estonian, Finnish and Hungarian. The speakers of these languages, he says, were fishermen who likely spread westward from Eurasia via waterways. Likewise, he says Na-Dene languages like Navajo didn’t spread with agriculture.

“Even for Indo-European, it is not universally accepted [that languages spread via agriculture]. Sometimes it does happen, sometimes not,” Vovin says.

Diving Into the Gene Pool

The third major line of Robbeets’ evidence involved genetics. Her colleagues gathered genetic samples from ancient human remains all over the region — and found that the genetic evidence is a little more complicated than the archaeological and linguistic evidence.

The results shared a common Amur genetic component. The name “Amur” corresponds to a region in southeastern Russia, and Robbeets says that many populations in that region (relatively close to the West Liao River region) reflect relatively pure Amur ancestry even today. “It looks as if we found the genetic mirror of millet adoptions and of linguistic adoption,” Robbeets says.

In Japan, for example, there was a massive gene flow from Korea during the Bronze Age. Prior to this influx, genes there mostly came from Jomon ancestry, a group that predated the Transeurasian spread through the Japanese archipelago. Robbeets says that the Jomons likely spoke a language from the Ainu family — few people from the Ainu ethnicity still speak a descendant of this language in northern Japan. “The Japanese language arrived in Japan relatively late together with Japanese language and Japanese genes,” she says.

The discovery is somewhat controversial, as many want to believe that Japanese is older on the islands. Vovin says that if one successful immigrant had a number of different children that in turn had many children of their own, it could have led to a huge spread of genes over many generations that bias the results. He also says that traditional Japanese-style houses provide evidence that the Japanese may have initially come from southern climates, rather than from northeastern China. Japanese-style houses aren’t very suitable for cold winters, and none of the yurts found in parts of China at the time occurred in Japan.

But Vovin disputes many other things about Robbeets’ work too, even down to the use of the term Transeurasian rather than “Altaic” to describe languages he says are almost entirely Asian. Turkic and Mongolic languages only reached Europe in the fourth and 13th centuries, respectively, he says.

“Transeurasian is a misnomer created by [Robbeets] with the sole purpose to control discourse,” Vovin says. “There are, as usual, multiple mistakes, some of them quite appalling,” he adds. “There are plenty of beautiful tables, charts and maps. But like the article itself, they include little, if any, substance at all.”

Robbeets says that further evidence is indeed necessary to solidify our knowledge of the spread of the Transeurasian people, language and farming techniques. But genetic analysis, etymological research and archaeobotanical evidence should teach us more.