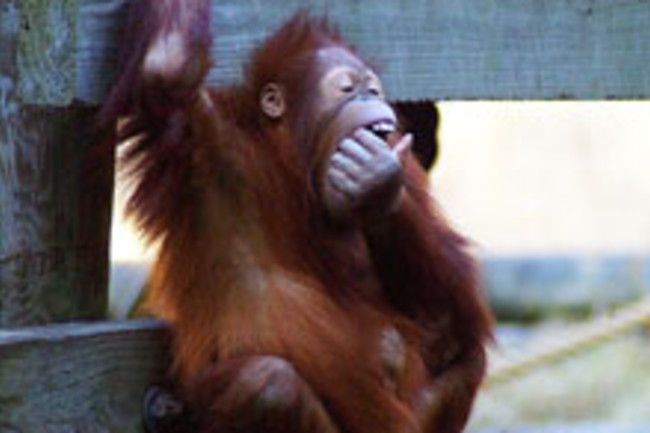 The European Commission has proposed a ban on medical research performed on our species' closest relatives, the great apes.

The pan-European initiative would extend a ban already in force in Austria, Great Britain, the Netherlands, and Sweden across the entire 27-member bloc. The ban, however, would not greatly affect current research, because no testing has been carried out on great apes in the EU for the past six years [The Scientist].

If approved, the ban would prohibit researchers from using great apes, including chimpanzees, bonobos, gorillas, and orangutans, to test scientific "procedures," although behavioral studies will still be allowed. There will also be exceptions for research that could save a great ape species threatened with extinction and in the case of a serious pandemic that affects humans. The proposal also affects research on other animals,

Nevertheless, the proposal [pdf] has received mixed reviews from both the scientific community, who fear excessive red tape, and animal rights groups, who say the ban does not go far enough.

stressing the "3Rs" of reducing the number of animals used, refining techniques to lessen pain and discomfort, and replacing animal studies with alternatives [ScienceNOW Daily News].

Some 12 million vertebrate animals are used each year in experiments throughout the 27-nation bloc -- half for drug development and testing, a third for biology studies and the rest for cosmetics tests, toxicology and disease diagnosis [Reuters].

Some scientists worry that the current proposal is only a preview of a more comprehensive ban on all non-human primate studies. They say primate models are necessary for the study of degenerative diseases like Alzheimer's and Parkinson's.

"We are dismayed that some members of the European Parliament are burying their heads in the sands of antivivisection propaganda, refusing to even meet researchers or visit animal facilities," said Dr Simon Festing, director of the Research Defence Society. "We are facing a strong push to restrict in any way possible the use of monkeys in research at a time when it is most needed and when there is no alternative" [Telegraph].

The proposal is awaiting approval by the European Parliament and the European Council of Ministers, a process that could take more than a year.

Though the controversy has focused on the "Great Ape Debate," species with fewer human advocates may also gain pardon from scientific research. For the first time, the rules would cover research on fetal nonhuman vertebrates in the final third of their development and several groups of nonvertebrates that show evidence of pain and distress, including octopuses, squid, and decapod crustaceans such as crabs and lobsters [ScienceNOW Daily News].