A Q&A With Primatologist Jane Goodall

We're not the only creatures with personalities, minds, and feelings. 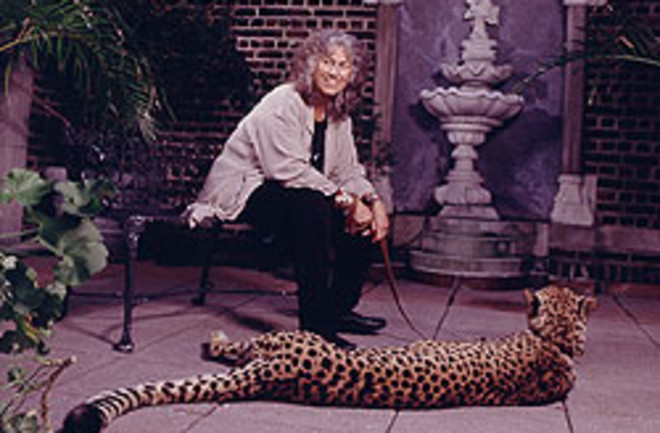 Jane Goodall began to observe chimpanzees in the Gombe forests of Tanzania 45 years ago. Her observations redefined primate research and led to the remarkable conclusion that chimpanzees make and use tools. Since then, she has shown that they have complex minds and emotions, and they pass on culture to their young. Now nearing 70, Goodall spends as many as 300 days a year crusading for conservation, research, and education and seeking funding for her Jane Goodall Institute. Her documentary, State of the Great Apes, airs on June 12 on Animal Planet.

Why do you spend so little time in Gombe?

G: There came a point of suddenly realizing that chimps are going, the forests are going, chimps in captivity have been tortured. So I couldn’t be really happy in the forest because I would know that I wasn’t doing what I could be doing to save it. I’m not needed in the forest. I’ve got to be outside of it and keep the forest inside.

What about chimpanzees attracts you?

G: Chimpanzees blur the line between humans and animals. Once you blur the line, once you realize that we’re not the only creatures with personalities, minds, and above all, feelings, that gives you a new respect, not just for the chimp but for other creatures. You know, we’re part of the animal kingdom, not separated from it. And that should be very exciting.

G: Think of the wonder that’s out there, and all the different ways of seeing, the experiences that we could have if only for a few minutes—if we could be a dog and know what is coming to that little nose through the window. If only for a few seconds we could be a bat flying through the darkness with echolocation or a dolphin way down under the sea using sonar clicks. If we could just experience these things, how enriched we would be. And that’s what science at its best is.

People compare you and Dian Fossey. . . .

G: Dian had a tremendous amount of contact with her subjects. I touched the chimps at the beginning—probably a mistake, but on the other hand, after a year of them running away, it was kind of just so magical that I would do it again. But from the beginning I really wanted to be an observer, to sit back and look through a window into a magic world and not be a part of it. Whereas she did. She would go and sit on the lap of a big male gorilla, and she’d make the gorilla sounds. So she wanted to be integrated into that world. I didn’t want to be integrated into that world. I never used their behavior, none, other than the odd gesture.

Why do you think she was murdered?

G: Unfortunately, although we talked about this many times, Dian refused to incorporate the local people into the study of the gorillas. To use them as trackers, yes, but they were never to be within sight of the gorillas. She thought that would make them even more vulnerable to poaching. And I said, if you hire some of these people in the villages where the poachers come from and they get to understand the gorillas, that’ll reduce your risk. We didn’t have any poaching of the Gombe chimps until refugees from civil wars arrived very recently. Zero.

Why are the two of you often compared?

G: Louis Leakey deliberately chose women because he thought they made better observers. I think his reasoning was that if you look at human mothers, they’ve got to have patience to be successful. Secondly, any human female must have some kind of programming to be able to understand the wants, the needs of a small creature that can’t speak. They have to devise ways to figure it out. And thirdly, women traditionally have been responsible for keeping peace within the family: You know, keep Little Joey away from Uncle Frank when Uncle Frank’s in a bad mood, or when Joey’s particularly mischievous. And all that means a lot of patience and ability to just watch for little nonverbal signs. So that may give one an edge on looking at very complex social behavior.

What is left to learn about chimp culture?

G: Chimpanzees actually seem to have quite an aesthetic sense. The captive ones, some of them absolutely love painting and drawing, and they will tend to balance a picture. So if they make their marks here, they tend to make them there to balance the thing. One study suggested they were capable of representational art, and I’ve always wanted researchers to look at that more.

We talk about “nature versus nurture.” Have you seen a parallel in primates?

G: Even among the chimps at Gombe, there are clear examples of good mothers and bad mothers. And the good mothers tend to raise offspring that become significant in the group and turn out to be very good mothers themselves and tend to mate with quite high-ranking males, whereas the bad mothers tend to raise young ones who grow up to become very tense in their interactions with others, and they’re not very successful. The first orphan I studied at Gombe lost his mother at about 31/2. He was completely changed. He didn’t want to interact with others anymore. The other young ones would try to play with him, but he became hostile and aggressive, sort of “Just keep away from me.” He died soon after, and that made quite an impact on me.

People tend to see human qualities in chimpanzees. Does it go the other way too?

G: Oh, quite easily. It’s the body language. We have a smile when we’re happy, but we also have a smile when we’re nervous. Lots of people show the nervous smile. Whenever I see that, I think of the chimp’s fear response. That’s an obvious similarity. And the swaggering walks of some males, you know, that Texan cowboy kind of thing.

You’ve raised a child. Are the human and chimp learning curves similar?

G: Up to about 2 years of age they are very much the same—surprisingly so. But they are every bit as different afterward. With the development of language, spoken language, everything changes. . . . because suddenly there are many new ways of teaching.

Chimps can be pretty aggressive, getting into territorial wars. Do you think war is a primate trait that extends to humans?

G: No, I think what’s happened is that there’s been a disconnect between who we are and what we can do. There isn’t really the same disconnect between spirit and self-interest in primates. Oh, they can be selfish, of course. They have a dark side, and they’re capable of brutality and all kinds of terrible things. And they have that “noble side”—altruism and love and compassion—as do we. But I don’t think they have the same ability as we have to deliberately take control of where they’re going with it. We can choose to suppress the ugly side, and most people do. If we didn’t, we’d have streets filled with gangs like the Crips and the Bloods. And we don’t, by and large.

But chimpanzees do form gangs, don’t they?

G: It’s exactly the same kind of thing, except that with the chimps, I think the behavior really is, in an evolutionary sense, to protect resources for their young. Maybe in a way that’s how human gangs also operate, because my understanding is that many of the conflicts are largely territorial. But what makes us human, I think, is an ability to ask questions, especially of ourselves—which is related to the fact that we have language. What the chimps have is like the beginning of morality. Once you have a sophisticated language, you can teach your children about what’s not present; we can discuss the past. We can sit around and discuss an idea so that it can grow from the accumulated wisdom of the group.

We know how humans and chimps interact, but what about chimps and other primates—baboons, say?

G: It’s the most fascinating relationship between species that I know of outside human interactions. At one end of the spectrum, they play, especially the young ones, and they may even have special play partners that they deliberately seek out. They understand each other’s alarm calls, some of their gestures. At the other end of the spectrum, adult male chimps may compete for food and even hunt, kill, and eat the baby baboons.

Will they play with less similar animals?

G: Yes. We’ve seen them playing with young bushbucks; they play with some adult monkeys as well. They may carry a smaller animal around for a while, but they’ll eventually kill it, even if it’s accidental.

No animal companions then?

G: Captive chimps, if they have the opportunity, form the most extraordinary relationships with dogs, absolutely. I know somebody who has a pet chimp and a little Jack Russell. The chimp is a 7-year-old male, quite strong. The chimp gets the little dog by one leg and starts twirling him around, and you think, “This must be ghastly,” until the poor dog finally gets away. What does he do? He runs straight back for more. You can really see how our own relationship with dogs might have evolved, because you’d think the dog would just chomp the chimp. But they never do. They never do. I’d love somebody to study it.