Even Monkeys Know Which Rock Will Break the Toughest Nut 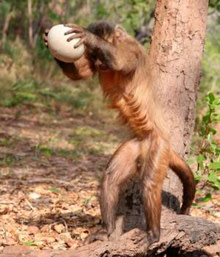 Capuchin monkeys not only have the capacity to use tools, they also know which tool is best for the job at hand, according to a new study. Researchers observed capuchin monkeys in the wild testing out different stones and consistently settling on the heaviest, sturdiest stone to crack open palm nuts. Although anecdotal reports existed before, the new study is the first to systematically document tool use in capuchin monkeys.

Because capuchins last shared a common ancestor with humans approximately 35 million years ago, the team writes, the capacity for stone-tool use evolved earlier than thought [New Scientist].

Researchers studied eight wild capuchins living in a forested area of Brazil. In several different trials, researchers planted two or three different rocks, of varying hardness, size, and weight, near where the monkeys were feeding. The choices ranged from crumbly sandstone to tough quartzite, with some artificial stones that the monkeys would not normally encounter also thrown in the mix.

Capuchins chose the most effective stone for cracking nuts more than 90 percent of the time in four conditions. That figure fell slightly to 85 percent when the monkeys selected from artificial stones of the same size and different weights [Science News].

The trick to effective nut-cracking, it seems, is to choose the heaviest rock.

"When a capuchin touched a light tool it almost immediately discarded it and switched to another stone to check if it was heavy enough," [New Scientist]

says researcher Elisabetta Visalberghi. It was clear that the monkey were not simply choosing a rock at random. They consistently selected the heavier rock even though

weight was not always visually obvious. The researchers found that if two or three stones looked identical, the capuchins would pick a stone at random and test it by lifting, moving, or tapping it [New Scientist].

Other than in humans, such tool selectivity had been shown only in chimpanzees, which are closely related to humans. Capuchins are much more distant relatives. “Here we showed that a species removed from humans 35 million years ago is capable of being extremely selective in terms of tool use,” Dr. Visalberghi said. “I’m far from arguing that this is extremely special and unique. Perhaps it is simpler than we expected” [The New York Times].

Nevertheless, it's likely that capuchins and early humans both discovered gadgets through play.

Writing in Current Biology [subscription required], the researchers do argue that the capuchin's tool-selection reveals planning and forethought. Other researchers believe such behavior can be learned through trial-and-error, and that the monkeys need only to develop a simple association between heavy stones and successful nut-cracking.

"You do a behavior in your free time, you play with objects, and by doing it over and over, discover something that turns out to be useful," said Visalberghi. "They spend a lot of time on the ground, like early humans probably did. It's possible that tool use is the byproduct of being on the ground where stones, anvils and nuts are, with time to explore, play and try new things" [Wired News].