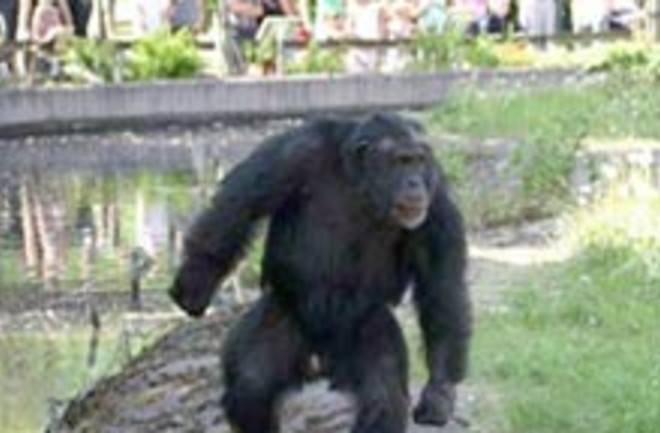 A belligerent chimpanzee in a Swedish zoo that stockpiles projectiles to hurl at visitors may be the first definitive proof that some animals can plan far ahead, researchers say. For years a male chimp named Santino has collected stones and other potential missiles into caches around his enclosure, which he returns to hours later when he wants to attack visitors. Researchers say the behavior proves that Santino was planning for the future because he

collected the stones in a calm state, prior to the zoo opening in the morning. The launching of the stones occurred hours later - during dominance displays to zoo visitors - with Santino in an "agitated" state [BBC News].

"These observations convincingly show that our fellow apes do consider the future in a very complex way.... It implies that they have a highly developed consciousness, including lifelike mental simulations of potential events" [AP]

, he says. In the new study, published in Current Biology, researchers note that Santino doesn't just collect stones from the moat that surround the zoo's "chimpanzee island," he also fashions projectiles from concrete rock structures within his enclosure.

"The chimpanzee was observed to gently knock on the concrete rocks, from time to time delivering harder blows to break off the detached surface in section in discoidal pieces, and sometimes breaking these into further smaller fragments," Osvath explained, adding that "these manufactured missiles were often transported to the caches at the shoreline" [Discovery News].

Santino, a 30-year-old chimp, is the only male in his small social group; he only engages in his displays of hurling during the summer months when the zoo is open to visitors. Zookeepers have tried to rein in the unruly Santino by confiscating his caches of weapons, but they admit that it's hard to foil a smart and determined chimp. Says Osvath:

"It's very hard to stop him because he can always find new stones, and if he can't find them he manufactures them. It's an ongoing cold war." He adds that since chimps don't have a good aim, and throw underarm, there haven't been any serious injuries [New Scientist].