A couple of weeks ago, I wrote about a dolphin that has mastered the trick of killing cuttlefish and elaborately preparing them for a meal. It was a great story that highlighted just how intelligent and versatile dolphins can be, but it was a bit of a bittersweet report. The cuttlefish didn't exactly come out of it very well, which is a shame - they are intelligent creatures in their own right, every bit as fascinating as dolphins are. So it's with great glee that I report a new study that should help to restore the cuttlefish's credibility and cement its position as one of the cleverer denizens of the sea. 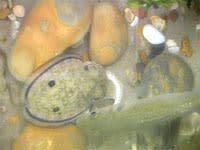 Cuttlefish have many defences and the most impressive of these is the ability to rapidly change the colour, pattern and texture of their skins. This skill can be used to hide themselves from sight, but they can also use it to make themselves exceptionally visible. If a small fish passes by, young cuttlefish will flatten their bodies to make themselves look bigger and suddenly flash two dark "eye-spots" on their backs and a black ring around their mantle (see video below). This is the "deimatic display" and it's a bluff. The goal: to shock and awe a would-be predator into abandoning the attack.

Many other animals, particularly insects like moths and mantises, flash similar eyespots for similar reasons. But they use their startling spots in a fairly crude way, flashing them at any potential threat that appears. Keri Langridge from the University of Sussex found that the cuttlefish uses its spots in a much more refined manner. Like all good communicators, it plays to its audience.

Langridge found that cuttlefish only flash their eyespots to the smallest of predators, who actually pose little threat to them. When faced with larger threats like sea bass or smooth hounds (a type of shark), which are less likely to be intimidated by a meagre bluff, they use different tactics. They can even tell the difference between these two predators and use a far more dramatic display against the more dangerous sea bass.

She placed young cuttlefish in tank with a glass partition separating them from a predator. They could see the danger but couldn't actually be harmed. When faced with an adult sea bass or a smooth hound, they did a number of different things, from darkening their colours to retreating to jetting erratically about the tank. But they never once flashed up the deimatic display.

Even though they were essentially trapped and had nowhere to flee to, they never used this distinctive signal. When much smaller sea bass juveniles were used, things were very different - they almost always used the deimatic display, often accompanied by a partial burying.

Langridge believes that cuttlefish are intelligent enough to only use their bluff tactic against those predators most likely to find it intimidating - small fish that hunt by sight. Juvenile sea bass aren't large enough to swallow a cuttlefish whole, but they might inflict wounds. Worse still, they could give away the cuttlefish's position by attracting the attention of larger hunters. They could even compete for food, eating or driving away small prey that the cuttlefish would otherwise eat. Either way, they deserve to be seen off.

Bluffing, however, is unlikely to work against bigger threats and the cuttlefish apparently know not to bother. However, Langridge found that they could tell the difference between the two larger predators and reserved a special display for the adult sea bass.

They faced the enemy, became very dark, crinkled and splayed their arms and protruded bumps and spikes from their skin. It's a drastic change that Langridge calls the "flamboyant display" and it's probably another, more dramatic type of bluff. She only ever saw it when adult sea bass were present.

Langridge believes that cuttlefish view adult sea bass as a far greater danger than either juveniles or smooth hounds. That idea needs testing but certainly, they were the only predators that made the cuttlefish drop all regular activity and immediately start defensive behaviours.

This isn't the first time that cuttlefish have demonstrated their ability to discriminate between predators and defend themselves accordingly. In an earlier study, Langridge found that young cuttlefish only use the deimatic display when confronted by predators that hunt by sight, like juvenile sea bass. When confronted by dogfish (another shark) that can sense electricity, or crabs that rely on smell, the cuttlefish never used visual defences. They just went straight to the fleeing.

This ability to tailor a defence against a particular predator is a regular feature among birds and mammals. Ground squirrels heat their tails with blood to fool temperature-sensitive rattlesnakes but not gopher snakes that can't detect heat. Gazelles jump to demonstrate their strength and ability to outrun sprinters like cheetah, but they never jump in front of wild dogs that rely on stamina for the kill. And birds like the black-capped chickadee make different alarm calls based on a predator's type, size and potential threat.

Such discerning defences are very rare among invertebrates, but cuttlefish buck the trend because of their large brains, sharp intelligence and keen senses. Cuttlefish differ from other species that use eyespots because they have other means of escape open to them. Mantises and large moths are not the most agile of fliers and can't flee very fast from approaching mouths. Cuttlefish can - they have rapid jet propulsion on their side, and can shoot out inky smokescreens to cover their escape.

So why would one stick around to bluff a predator when it has less risky alternatives? Langridge says, "The answer may lie in their advanced decision-making capabilities." Alternatively, it could be that the deimatic display isn't aimed at direct threats, but harmless pests that could attract unwanted attention or scare off prey.

Whatever the answer, it's likely that other cephalopods, like squid, behave in the same way. There's no published data to support this, but another cephalopod expert, Jennifer Mather, says that Caribbean reef squid also use deimatic displays but only to small plant-eating fish and never to more dangerous species like the yellowtail snapper. Mather also claims that the squid uses specific displays to specific groups of predators and they match the speed of their escape to the speed, size and distance of a threat. Perhaps in time, squid and cuttlefish will start pulling out guns on those too-clever-by-half dolphins...