Many naturalists become so familiar with the animals they study that they can recognise individuals within a population using just their shapes and patterns. If that's too difficult, animals can be ringed or tagged. These tricks give scientists the invaluable ability to track the fates of individuals, but try using them on octopuses. 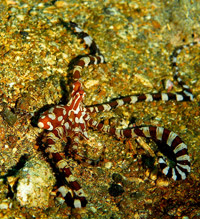 Recognising shape and pattern is impossible when your subject has the ability to change the texture and colour of its already pliant body on a whim. Injured individuals are distinctive enough, but only for a short while before their remarkable healing abilities close wounds and regenerate arms. Tags, which work well for closely related animals like squid, are useless for octopuses, which have eight long and dextrous arms for pulling markers off. And other techniques are simply either too impractical, expensive, or harmful to the creature.

This inability to track individuals in the wild has severely limited our knowledge of octopus populations, including how far their ranges extend, how many individuals live in a certain area and how long the live for. But that may change. Christine Huffard from the Monterey Bay Aquarium Institute has found a way to identify one species of octopus - the grandiosely named wonderpus - just by using the markings on its skin.

It's a surprising discovery for animals that are so known for their colour-changing abilities but the wonderpus has a relatively static uniform of white markings on a brown background. Huffard was studying photos of this beautiful creature (it's scientific name is actually Wunderpus photogenicus) when she noticed that the white Rorschach-blot patterns on the back of its head differed between individuals.

To see if others agreed, Huffard canvassed several underwater photographers for their best wonderpus shots and eventually collected 30 photos of 15 different individuals, all depicting their head from above. She showed these shots to 33 volunteers, some of whom scoured the full set for matches, while others just had to say if specific pairs were matches. Either way, the observers were remarkably accurate - almost all of them scored more than 90% and just over a third scored more than 95%.

Based on these results, Huffard thinks that human observers can use these white marks like the equivalent of a wonderpus name tag. It's unlikely that they simply reflect patterns worn by different genders, for there were many more than just two different layouts. Nor is it likely that the patterns change over time - the volunteers managed to match photos of the same octopus taken up to 10 weeks apart.

There are a few caveats. The distinctive white marks of the wonderpus remain even when it camouflages itself, although it can make the boundaries blurrier than usual. It can also push out small nipple-like studs on its skin called papillae to slightly change the shape of the markings. Huffard deliberately left out any shots of octopuses with erected papillae or activated camouflage, so it's not clear if these tricks would make them less recognisable.

Nonetheless, neither change significantly alters the white marks and Huffard maintains that they can be used to identify individual octopuses from photos. Certainly, these shouldn't be hard to come by, for the animal's image is a great prize for keen underwater photographers. It has also become an increasingly popular aquarium species, with specimens fetching up to $700 apiece. With this keen attention and these high price-tags, it's worrying that there is no way of monitoring how healthy the wild populations are and very little is known about their natural history. Sometimes, they'll be everywhere and at others, not a single individual will be seen for months on end.

Huffard hopes that the ease with which individuals can be identified through photos will lead to the start of an easy monitoring program, that underwater photographers will be all too happy to participate in. It has already begun - Huffard's group have set up a website called Wunderpix, where photographers can upload their wonderpus snaps. With brief information on the date and site of shots, individuals could conceivably be tracked to give more of an idea about their lifespans and movements. Conservationists could even use the photo database to work out if specimens that go on sale were taken illegally from protected areas.

It's not clear why the wonderpus has such distinctive markings in the first place. Biologists have mostly assumed that octopuses, being solitary animals, have little need for the ability to recognise other individuals and no one has properly tested whether they can do so. It's not unfeasible - octopuses are intelligent animals with decent memories and excellent eyesight.

Regardless, it seems that the wonderpus can now join species like whale sharks, cheetahs and coelacanths in the small club of animals that can be recognised solely through colour markings. Other octopus species may gain membership eventually. The blue rings from which the lethal blue-ringed octopus are also arranged in distinctive patterns that could allow naturalists to tell one from the other.

More from Not Exactly Rocket Science: