The Humboldt squid is not an animal to mess with. It's two metres of bad-tempered top predator, wielding a large brain, a razor-sharp beak and ten tentacles bearing 2,000 sharp, toothed suckers. It cannibalises wounded squid, and it beats up Special Ops veterans. But over the next few years, the Humboldt faces a threat that even it may struggle against, one that threatens to deprive it of the very oxygen it needs to breathe - climate change. 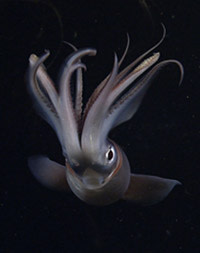 The Humboldt squid (also known as the jumbo squid) lives "chronically on the edge of oxygen limitation". Through an unfortunate combination of physiology, behaviour and environment, it has an unusually high demand for oxygen and a short supply of it. Its survival is precariously balanced and changes to local oxygen levels brought on by climate change could be the thing that tips them over the edge.

For a start, the Humboldt needs a lot of oxygen compared to a fish of equal size. It is incredibly active but it relies on jet propulsion to get around, a relatively inefficient method compared to fins or flippers. Worse still, a fluke of physiology means that the squid's blood has a surprisingly low capacity for oxygen compared to equally active fish. And every time it circulates round the body, whatever oxygen there is gets completely used up with nothing left in reserve.

Unfortunately, supply doesn't always meet demand. Their home in the Eastern Tropical Pacific already has some of the highest temperatures and lowest oxygen levels in the oceans. The middle depths are particularly low in oxygen and every day, the squid migrate through these "hypoxic zones", rising vertically from the ocean's depths to the oxygen-rich waters of the surface.

But these zones are expanding. As global warming takes hold, the seas will warm, dissolved carbon dioxide will render them more acidic and their oxygen levels will fall. It has already begun - climate scientists have found that over the past 50 years, the low-oxygen zones of the eastern tropical Atlantic Ocean have expanded vertically, to cover a taller column of water. In doing so, the squid's range is being squeezed into an ever-narrower area.

Rui Rosa and Brad Seibel from the University of Rhode Island tested the Humboldt's ability to cope with predicted climate change, by capturing 86 live squid and putting them through their paces in special tanks aboard their research vessel.

Rosa and Seibel found that the squids use up more oxygen than almost any other marine animal. Even their lowest metabolic rates are higher than those of sharks and tuna. However, they are also capable of slowing their metabolism down by about 80% in order to cope with a dearth of oxygen.

It's a very useful ability - without it, the squid would need to take more "breaths" and because they do that by contracting their large muscular bodies, their oxygen demands would rapidly escalate to unfeasible levels. Tuning down their metabolism also allows them to cope with conditions that put off other fishy predators and allows them to dive into far deeper and colder waters. But they can't keep it up forever. After a while, anaerobic respiration depletes their reserves and builds up toxic chemicals (like the lactic acid that accumulates in our muscles). They eventually need oxygen and they rise to the surface to get it.

To see how the changing ocean environment would affect these animals, Rosa and Seibel exposed their captive squid to and range of different temperatures, oxygen levels and carbon dioxide levels, including the most pessimistic predictions of the Intergovernmental Panel for Climate Change for 2100.

They found that the squid struggle to cope with a combination of less oxygen, more carbon dioxide and higher temperatures. Being cold-blooded, a squid's internal temperature is very tied to its environment and warmer waters cause its metabolism and need for oxygen to rise to unsustainable levels. If its home waters warm by 2 to 3C, as predicted by the end of the century, it risks incurring an "oxygen debt" that is can't repay.

Unfortunately, the increasingly acid oceans will also hit its ability to carry oxygen in its blood, and that in turn will limit how fast and active it can be. Its changing environment risks making the Humboldt a poorer hunter and an easier catch. The expanding oxygen-poor zone in the ocean's middle layers will also squeeze them into ever tighter ranges and could even create an invisible ceiling that prevents them from accessing the shallow waters at night.

Rosa and Seibel fear for the Humboldt's ability to cope with these changes, and for what that could mean for other animals. The Humboldt is an important species - it has recently expanded its range to areas where overfishing have removed other top predators such as sharks, and it provides food for many bird and mammal species, including humans. Similar animals, whose lives are a fine balancing act, may soon number among the many casualties of our changing climate.

More on squid and cephalopods: