Two strangers are having a normal conversation in the middle of a large crowd. No one else can see them. No one else can listen in. Thanks to advanced gadgetry, they are talking in coded messages that only they can decipher. These invisible conversationalists sound like they've walked out of a Bond film. But they are entirely real, and their skill at secrecy is biological, not technological. They are squid. 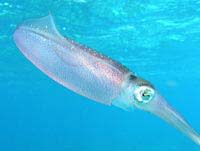 Squid and their relatives, the octopus and cuttlefish, are masters of concealment. They have the most sophisticated camouflage abilities in the animal kingdom and use them to avoid predators who would gladly feast on their soft shell-less bodies. Their remarkable abilities also allow individuals to communicate with each other through a rich vocabulary of colour-changes and body postures. But in doing so, they face a problem - how can they signal to each other without compromising their finely crafted camouflage?

Lydia Mathger and Roger Hanlon at the Marine Biological Laboratory, Massachusetts, have the answer and it lies in the squid's dual-layered skin. The animals use these two layers to communicate with one another using polarised light, without ever compromising their perfect disguises.

The top layer consists of specialised sacs of coloured pigment called chromatophores, which can expand or contract on command. By switching them from concentrated specks to flat plates, the squid can produce rapid bursts of colour. But the key to secret signalling lies in the bottom layer.

This consist of cells called iridophores, which contain stacked plates of protein separated by liquid. When light hits each plate, some is reflected but the rest passes through to the other plates below. The squid can control the size of the gap between the plates, so that they match the wavelength of different colours of light. 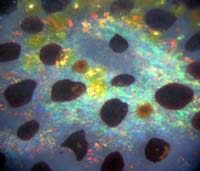 As a result, the multiple reflections add up in precise ways and reinforce each other, producing intense bursts of colour. This is known as iridescence. Mathger and Hanlon found that as the iridescent light passes the top layer, the squid can modify its brightness and colour by expanding the chromatophores over it (the dark blobs on the image on the right).

The iridophore's light allows the squid to cope with colours like blue and green that the chromatophores don't contain, and refines its ability to blend into the background. The two layers, by acting together, represent the ultimate in subterfuge technology.

But the same structures that produce iridescence also do something special to the reflected light - they polarise it. We can think of light as a wave that vibrates in every possible direction as it moves along. The effect is similar to a piece of string attached to a wall and shaken it in all directions. But polarised light vibrates in just one direction - imagine just shaking the piece of string up and down.

Squid and their relatives have eyes that are sensitive to polarised light and to them and are known to use it to signal to one another. Their predators on the other hand, like seals or whales, don't share this ability and cannot see the squids' signals.

Most of all, the polarised iridescent light, is not affected by the chromatophores and passes through unaltered. This means that camouflaged squid can have entire visual conversations while remaining invisible to passing predators. In the world of squid, conversations carry secrets wrapped in lies.

Incidentally, squid aren't the only animals to use polarised light for secret signalling; the awesome mantis shrimp does it too.