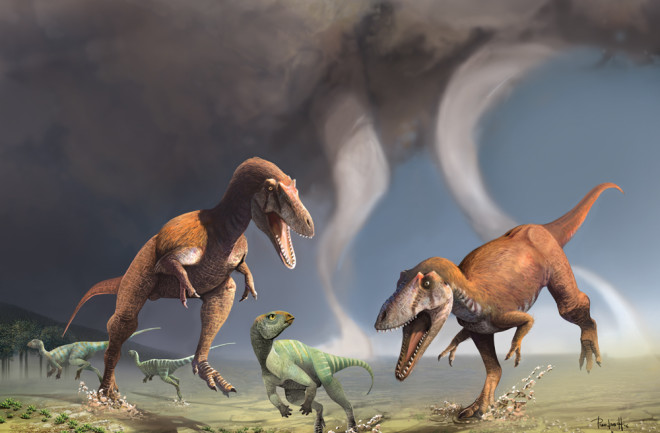 Gualicho shinyae a deux prepare to make short work of a wee hadrosaur in this artist's rendering that makes me want to form a doom metal band just so we can use this as an album cover. Credit: Jorge Gonzalez and Pablo Lara. If you thought T. rex and its close relatives were the only dinosaurs that had a tough time brushing their teeth, making the bed or completing any other task that required forelimbs of useful length, think again. In a prime example of convergent evolution — unrelated animals evolving the same trait — a new theropod dinosaur from South America was also doing the short arm shuffle. Both tyrannosaurids and the newly described dinosaur, Gualicho shinyae, were theropods, but don't think they were kissing cousins on their family tree.

Evolution nailed it very early in the lineage of theropods, one of the major models of dinosaur. In fact, it looks like the very first dinos were theropods: basically, bipedal carnivores. Yes, okay, a handful of theropods went vegan after a careful examination of their conscience (or an imbalance in the prey-predator ratio that made eating vegetation a successful survival tactic...you decide which reason was more likely). But, for the most part, evolution took the basic, successful theropod blueprint and then painted it with all the colors of the wind, creating wildly diverse variations. Theropods ranged in size from chicken-ish to megapredators exceeding 50 feet in length. They spread across the world, their fossils found from the Arctic to the ancient rivers of what's now sub-Saharan Africa.

As much as I love the new G. shinyae art, this rendering of Arctic-dwelling theropod (and tyrannosaurid) Nanuqsaurus hoglundi remains the most wonderful dino-illustration ever. Totally want this on a t-shirt. Or a black velvet painting. Credit: Karen Carr. In some theropods, their forelimb digits became elongated, the wrist bones more specialized, leading over time to birds. Other theropods went a different direction, most famously the tyrannosaurids, evolving shorter forelimbs with fewer digits. G. shinyae, described today for the first time in PLOS One, got shorted by evolution in the forelimbs which were also didactyl, with two digits — just like T. rex and other tyrannosaurids. But G. shinyae is an allosaurid, a more primitive line which branched off much earlier in the theropod story. Allosaurids are best known through, you guessed it, Allosaurus, which was around about 150 million years ago, in the Late Jurassic. That's significantly earlier than G. shinyae, which was found in rocks from the Late Cretaceous dating to 90-94 million years old.

G. shinyae is a curious mix of basal, or primitive, and more advanced traits. The short forelimbs and double digits are more advanced adaptations, for example, not seen in earlier relatives. But other details revealed in the partial skeleton, such as its toe bones, are throwbacks. The mid-sized predator actually appears to be most similar to another early Late Cretaceous meat-eater, Deltadromeus, which hails from northern Africa. That shouldn't be too big of a surprise, since South America and Africa had just recently started going their own ways at the time, tectonically speaking.

A far less entertaining depiction of G. shinyae. Fossils recovered from the Late Cretaceous Huincol Formation are shown in white. Credit: Jorge Gonzalez and Pablo Lara. Paleontologists unearthed the partial skeleton of G. shinyae in 2007 from Argentina's Huincul Formation. In addition to Gualicho, the site has yielded fossils from a large sauropod and another variety of theropod as well as dinosaur coprolites. The Field Museum's lead fossil prepper Aikiko Shinya spotted the first bits of the animal, which was named after her in part. The expedition was marked by mishaps, however, which explains where Gualicho comes from: it's the spirit of bad luck, according to the Tehuelche people of the region where it was found.

A Call To Arms

Convergent evolution usually happens when unrelated animals develop the same (or similar) trait that gives them a leg up, so to speak, in a similar ecological niche. And I know you're thinking, okay, there must have been some big advantage if having tiny arms with two measly claws shows up in a range of unrelated theropods — so what was it? Uhm...we dunno. A variety of theories have been suggested, from holding prey to holding one's significant other while knocking boots, as the kids say (the fortysomething kids...). But our best shot at a real answer may come from ongoing research that aims to reconstruct digitally the forelimb musculature of some of these short-armed theropods. The results might tip us off to what made those dinky arms so awesome in the Cretaceous. Though, it must be said, being short in the forelimbs is itself not an obstacle to greatness, whether it's climbing to the top of the food chain or competing in American Ninja Warrior.