The First Dinosaur to Menace Both Land and Water

A new specimen of Spinosaurus aegyptiacus helps researchers sort out its strange traits. 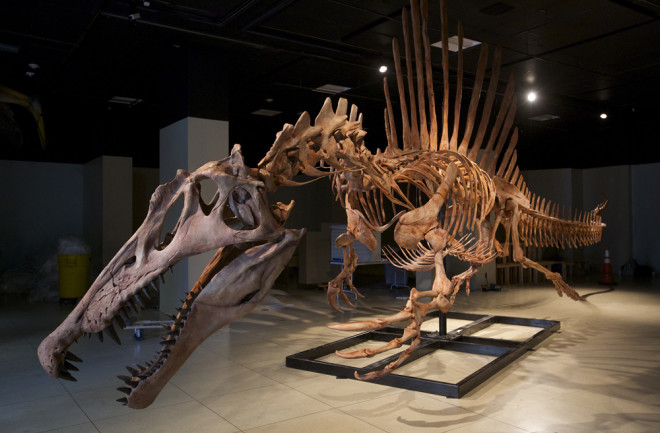 Uncovered in Saharan Morocco, a new specimen of the dinosaur Spinosaurus aegyptiacus helped researchers confirm that the 50-foot carnivore was the largest land predator ever known. And that’s probably the least interesting thing about the strange animal; Spinosaurus is also the only aquatic dinosaur ever identified.

“Spinosaurus breaks the mold. It’s not just another T. rex-like predator, only bigger,” says Nizar Ibrahim, the University of Chicago paleontologist who led the dig. When it comes to its bones, “to be honest, one of the best modern analogs for it is the penguin.”

Spinosaurus lived about 95 million years ago in the massive river systems of what’s now northern Africa. It was a powerful swimmer, with a crocodilian snout, broad feet that may have been webbed, shortened but heavily muscled hind limbs and a propulsive tail similar to that of some fish.

Using CT scans of the new fossil to create a digital model of the dinosaur, Ibrahim and colleagues also discovered that Spinosaurus is the only dinosaur that evolved to lose the central cavity in its limb bones. The adaptation, which provides buoyancy control, can be seen today in aquatic animals such as the hippo and, yes, the penguin.

The megapredator also had a 7-foot-tall sail on its back, likely used for display. Although its anatomy suggests Spinosaurus spent at least some time on land, the dinosaur’s front-heavy mass and shorter hind limbs meant it had an ungainly, slothlike posture.

The only other partially complete Spinosaurus was destroyed during World War II, making study with modern methods impossible. Some paleontologists had doubted the bizarre chimera even existed. The new finding, published in September in Science, proves the skeptics wrong.

Says Ibrahim: “The truth about a dinosaur is written in its bones.”