In July last year I asked, Could Traveling Waves Upset Cognitive Neuroscience? This was a post about a paper from David Alexander et al. arguing that neuroscience was overlooking the importance of how neural activity moves or travels through the brain. Now Alexander et al. are back with a new PLoS ONE paper in which they describe traveling waves in human brain activity, as measured with magnetoencephalography (MEG). The authors scanned 20 volunteers during a visual and auditory task. Alexander et al. focussed on "the class of waves which are characterized by a linear trajectory in the Cartesian coordinates of the sensor space." Here's a visualization. On the left we see a classical standing wave, on the right is a traveling wave. On this image, the horizontal axis is time and the vertical axis is space - each row represents one of the MEG scanner's 151 sensors, arranged around the volunteers' head. The color represents the phase of the wave, in this case in the alpha band with a frequency of 9.2 Hz. The diagonal stripe in the right panel shows a wave moving in space. A movie representation of a traveling wave can be seen here. 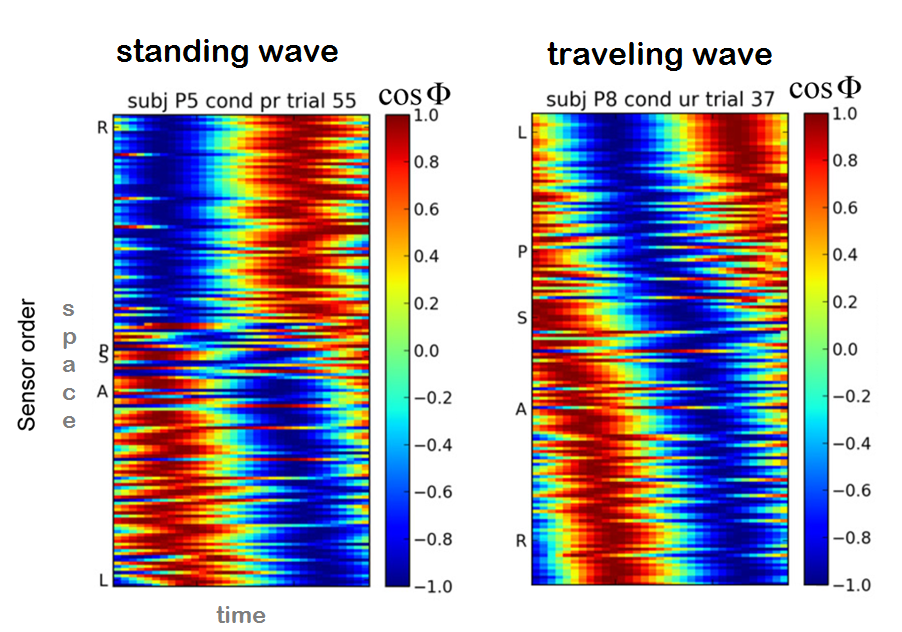 So what were these traveling waves? They tended to have a long spatial wavelength, mostly 30-35 cm - which means that they spanned pretty much the entire head. Alexander et al. say that there may also be more localized waves (shorter spatial wavelengths) which MEG cannot detect, because the skull filters them out. The speed of the waves (group velocity) was correlated with their frequency. For the fastest beta waves (28 Hz), the measured speed was around 4 meters per second - and the true speed, in the brain, will have been higher, because the brains folds mean that the path distances are longer. The authors conclude

Overall, wave events have broad distributions of both trajectories and speeds. The waves are ubiquitous, with clear episodes across the frequency range, several times a second...

So what's going on? I asked Alexander

"Do we know how these brain-wide waves happen? Are they purely cortical in origin, or are they co-ordinated by input e.g. from the thalamus?"

we don’t “know” whether they are purely cortical in origin. They clearly are heavily cortical, but there’s not the evidence yet. I could only give a bunch of speculations, and this would mainly reflect my own bias that connection topology is more important than the evolutionary accretion of anatomical structures.