I finally got around to watching Torchwood: Children of Earth this weekend. [MINOR SPOILER ALERT] 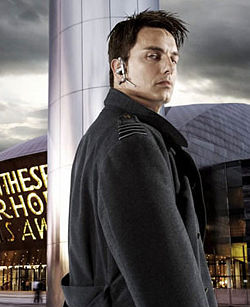 Wow. Bleak. Maybe I shouldn't have watched all five episodes in one afternoon, but I haven't been this depressed since Dark Knight. What happened to the randy, swashbuckling Captain Jack that we loved? On the SciNoFi front though, Torchwood gives us the opportunity to revisit the topic of eyeball spy cameras, last seen in an episode of Dollhouse this spring. As Stephen noted in a post at that time, scientists have been working on plugging directly into the brain (in cats at least) to locate and interpret visual processing activity. Interestingly, the Torchwood contact lenses appeared to be a much more basic technology: essentially small video cameras that could transmit images back to a laptop and also display text messages to the wearer. Given how far we have to go in understanding the brain, a contact lens camera is probably a more straightforward and only marginally more detectable solution for this kind of surveillance. Eyeball sized cameras are already commercially available.