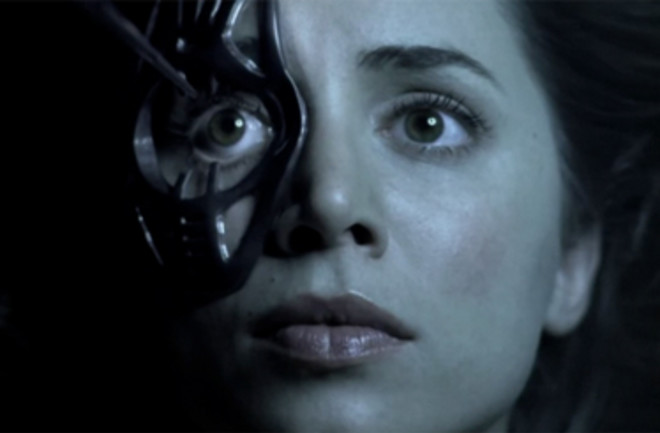 After last week's focus on Battlestar Galactica's series finale, we turn to some items from other shows, that fell through the cracks. First up is a recent episode of Dollhouse, in which Echo, (played by Eliza Dushku) is imprinted so that she can infiltrate a cult's compound that the Bureau of Alcohol, Tobacco, Firearms and Explosives happens to be very interested in. So that the ATF can keep tabs on what is going on, Echo has a device surgically implanted in her brain that allows the ATF to tap into what her eyes are seeing (for dramatic purposes, the implant's diversion of her optic signal renders Echo blind.) This is a technology that has already seen a proof-of-concept demonstration. In 1999, researchers from Berkley and Harvard inserted electrodes into the brains of anesthetized cats that monitored the activity of 177 neurons located in the lateral geniculate nucleus, a key visual processing center. Using a computer to process the signals from the brain, the researchers were able to reconstruct different test images places in front of the cat's eyes, albeit at a low resolution. While some people see this work as a possible pathway to give sight to the blind, by feeding images into the lateral geniculate nucleus instead of extracting them, it would require (as demonstrated on Dollhouse invasive brain surgery that would carry commensurate risk.