Star-Shaped Brain Cells May Provide the Actual Food for Thought 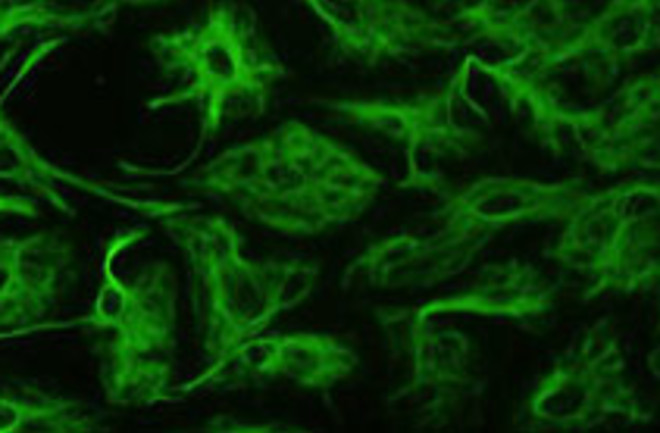 The human brain is packed with star-shaped cells called astrocytes; they make up about 50 percent of cells in the cerebral cortex, and far outnumber the neurons that process and transmit information. Yet until recently, researchers thought these ubiquitous brain cells were fairly unimportant to the brain's functioning. Now a new study rebuts that theory, and indicates that astrocytes play a major role in sending blood to areas of brain activity. In the study, a team of MIT researchers peered into the visual cortex of live ferrets with an advanced microscope to watch how the brain cells responded to visual stimuli.

"Electrically, astrocytes are pretty silent," study co-author James Schummers said.... "A lot of what we know about neurons is from sticking electrodes in them. We couldn't record from astrocytes, so we ignored them." The researchers changed this perception by imaging astrocytes with two-photon microscopy. "The first thing we noticed was that the astrocytes were responding to visual stimuli. That took us completely by surprise," Schummers said. "We didn't expect them to do anything at all. Yet there they were, blinking just like neurons were blinking" [HealthDay News].

Previously, researchers didn't understand how increased blood flow was linked to neural activity, although the brain scans that have become a mainstay of neuroscience research rely on that connection. Researchers often expose a test subject to some stimulus (for example, pictures of pretty girls) while conducting a functional MRI scan to see which part of the brain "lights up," indicating that the blood has rushed to that active brain area. The new findings, published in the journal Science [subscription required], suggest that the astrocytes are controlling that response. Lead researcher Mriganka Sur says a chemical signal to increase blood flow is probably

This discovery could lead to an exciting new branch of medical research.

given at the synapses between neurons.

Synapses typically have a branch of an astrocyte nearby, either projecting into or wrapping around the synapse. Astrocytes also branch out to nearby blood capillaries. Sur says that astrocytes likely take up neurotransmitters released into synapses and cause nearby capillaries to dilate [Technology Review].

[T]he new research indicates they may actually be major operators that, when out of whack, may help trigger mental disorders such as autism and schizophrenia.... "A great many genes that have been linked to autism and schizophrenia are likely to be active in astrocytes," Sur says. "We believe astrocytes will have a huge role in understanding certain brain diseases" [Scientific American].