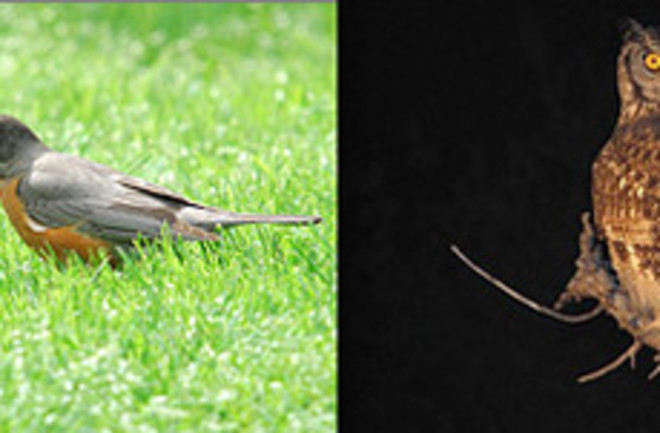 Researchers have found fundamental differences between the brains of people who prefer to rise and greet the dawn each day, and those who don't mind seeing a sunrise, but only if it's at the end of a long night. A new study used brain scans and alertness tests to probe the brains of early birds and night owls, and found that

people tend to favor mornings or nights based at least in part on how they react to a kind of competition in the brain [National Geographic News].

Two factors control our bedtime. The first is hardwired: A master clock in the brain regulates a so-called circadian rhythm, which synchronizes activity patterns to the 24-hour day. Some people's clocks tell them to go to bed at 9 p.m., others' at 3 a.m.... The second factor--called sleep pressure--depends not on time of day but simply on how long someone has been awake already [ScienceNOW Daily News].

Sleep pressure builds up as hours of wakefulness increase. The new study, published in Science, suggests that early birds are more susceptible to sleep pressure, giving night owls the advantage in stamina. In a sleep lab, the researchers

studied people with extreme bedtimes, or chronotypes, both early and late. The larks in the study typically woke up between 4 a.m. and 5:30 a.m. and went to bed by 9 p.m. The night owls, or evening chronotypes, left to their own devices would go to bed at 3 a.m. or 4 a.m. and rise at noon [Science News].

All the test subjects maintained their preferred sleep schedules to avoid interfering with their circadian rhythms, and took tests measuring their alertness 1.5 hours after waking, and again 10.5 hours after waking. In the earlier test researchers saw no difference between the two groups' performances, but in the later test the night owls performed better than the early birds, and also topped their own prior test results. FMRI brain scans told the rest of the tale.

In the night owls, increased activity was seen in two parts of the brain at 10.5 hours — the suprachiasmatic nucleus area and the locus coeruleus — that are involved in regulating the circadian signal. Essentially, the circadian signal was winning out over the pressure to sleep. In the early birds, on the other hand, "the sleep pressure prevents the expression of the circadian signal," so those individuals were less able to keep their attention focused [LiveScience]

But while night owls seem to handle sleep pressure better, the late-to-bed strategy might backfire outside the lab.... "Morning types may be at an advantage, because their schedule is fitting better with the usual work schedule of the society," [Peigneux] said. "It may represent a problem for evening types obliged to wake up early while having difficulties going to bed in the evening, eventually leading to a sleep debt" [National Geographic News].