Sleep May Prepare You for Tomorrow by Dissolving Today's Neural Connections 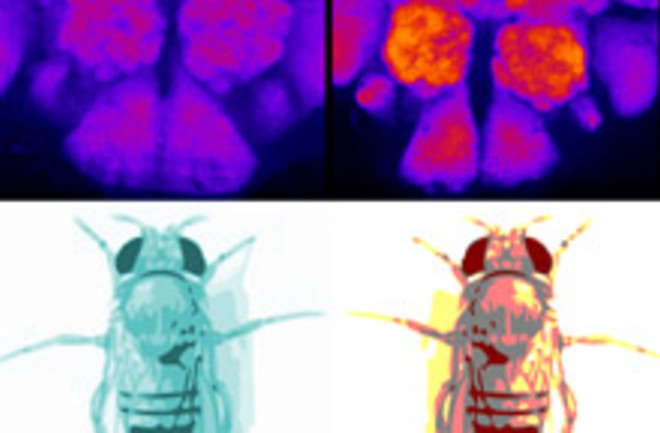 Sleep may be a way to sweep out the brain and get it ready for a new day of building connections between neurons, according to two new studies of fruit flies. The studies support the controversial theory that sleep weakens or entirely dissolves some synapses, the connections between brain cells.

"We assume that if this is happening, it is a major function, if not the most important function, of sleep" [Science News],

"There are a number of reasons why the brain can't indefinitely add synapses - including the finite spatial constraints of the skull. We were able to track the creation of new synapses in fruit flies during learning experiences - and to show that sleep pushed that number back down" [Telegraph]

, he says. In the first study, Cirelli and her colleagues show that proteins found in the synapses

build up in fruit fly brains while the flies are awake. Depriving flies of sleep leads to ever-greater levels of synaptic proteins, the researchers show. Levels of the proteins decrease as the flies sleep [Science News].

The researchers couldn't directly determine synaptic strength because fruit fly brains are too small to allow them to measure electric activity between neurons; however, they say that measuring the proteins is a valid indirect gauge of synaptic strength. Meanwhile, Shaw's lab had previously determined that fruit flies sleep longer following social interactions, rather like a human who has been through a busy day. His team then

showed that the brains of socially isolated flies contained fewer synaptic terminals than flies subjected to social enrichment, and that the number of terminals decreased in flies that were allowed to sleep. "I think our data shows the first signs of real structural changes," he said [The Scientist].

Related Content: DISCOVER: Why We Sleep has more on the theory of synaptic pruning DISCOVER: 20 Things You Didn’t Know About… Sleep DISCOVER: Mind Over Time asks whether we can alter circadian rhythms 80beats: Sleep Experiment Shows the “Graveyard” Shift Is Aptly NamedImage: Chiara Cirelli. The synaptic markers are low after sleep (left) and high after wakefulness.