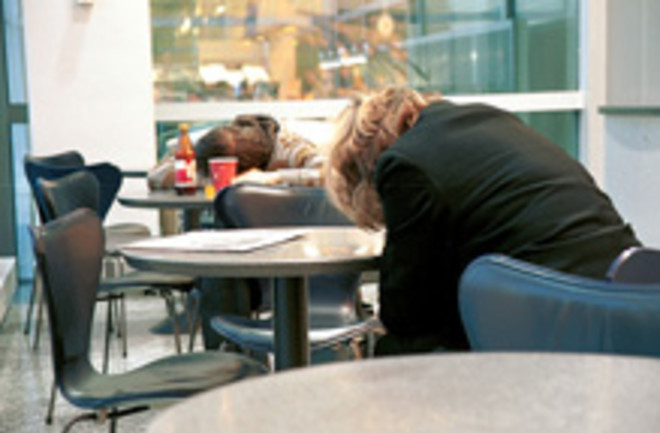 Researchers have another clue as to what's happening in the brains of bleary-eyed air travelers suffering from jet lag: Two groups of brain cells become desynchronized, according to a new study.

The study was undertaken in rats exposed to different amounts of light designed to simulate the effects of flying from Paris to New York.... "One group of neurons tells your body it is Paris time and another says that it is New York time. You are internally desynchronized," [Telegraph]

helps us keep track of when it's time to eat, sleep, wake up and perform other body functions. This system is partly governed by the cycle of day and night. Changing time zones or working the late shift can throw off the body's sense of timing because it changes the timing of our exposure to light [LiveScience].

The new study, published in Current Biology, examined a tiny section of the brain called the suprachiasmatic nucleus that controls circadian rhythms, and found that while one group of neurons adjusted to a time change relatively quickly, another group that governs dream-filled REM sleep can take up to a week to catch up. One group of brain cells

— the ventral, or bottom, neurons — receives light information directly from the eyes and governs rhythms in tune with periods of light and dark. These neurons are synchronized with the deep sleep associated with physical fatigue because that part of sleep is most closely tied to light-dark cycles. The other group — the dorsal, or top, neurons — is insensitive to changes in light and is more closely tied to REM sleep, or the dream state of rapid eye movement [LiveScience].

And while the neurons governing deep sleep quickly adjusted to changes, it took the REM-governing neurons between 6 and 8 days to get back into sync. De la Iglesia says that the findings may help researchers trying to develop pharmaceutical cures for jet lag.

"We can go back to the treatments that are believed to be effective and see where they might be acting in the circuitry of these neuron [centers], then refine them to be more effective" [Telegraph]