NCBI ROFL flashback: Will your love last? This mathematical model may hold the answer... 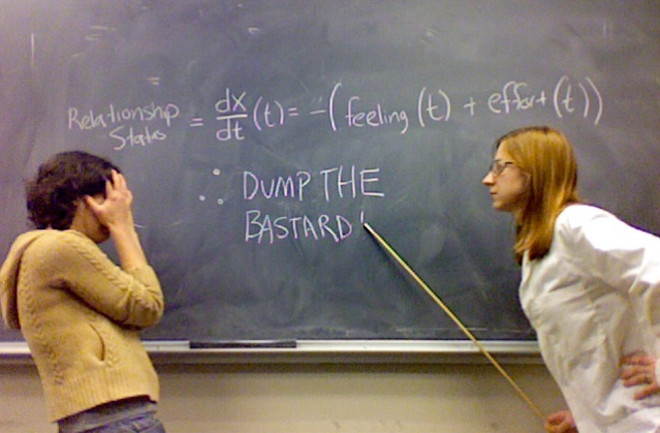 A mathematical model of sentimental dynamics accounting for marital dissolution.

"BACKGROUND: Marital dissolution is ubiquitous in western societies. It poses major scientific and sociological problems both in theoretical and therapeutic terms. Scholars and therapists agree on the existence of a sort of second law of thermodynamics for sentimental relationships. Effort is required to sustain them. Love is not enough. METHODOLOGY/PRINCIPAL FINDINGS: Building on a simple version of the second law we use optimal control theory as a novel approach to model sentimental dynamics. Our analysis is consistent with sociological data. We show that, when both partners have similar emotional attributes, there is an optimal effort policy yielding a durable happy union. This policy is prey to structural destabilization resulting from a combination of two factors: there is an effort gap because the optimal policy always entails discomfort and there is a tendency to lower effort to non-sustaining levels due to the instability of the dynamics. CONCLUSIONS/SIGNIFICANCE: These mathematical facts implied by the model unveil an underlying mechanism that may explain couple disruption in real scenarios. Within this framework the apparent paradox that a union consistently planned to last forever will probably break up is explained as a mechanistic consequence of the second law."

“The model produces a plausible scenario, through a sequence of effort inattentions, for the deterioration of a relationship in a gradual form, which seems to be typical according to data. Because of the effort gap, there is a tendency to lower the right effort level. Then the intrinsic instability of sentimental dynamics obeying the second law causes the piecewise decaying trajectories to move further and further away from the target trajectory and eventually to cross the threshold level xmin. This is considered a point of pre-rupture, since it is a matter of time before effort is abandoned.”

Read the free full text of the article here.

Thanks to Cris for today's ROFL!