Have you ever seen someone that you're sure you recognise but whose face you just can't seem to place? It's a common enough occurrence, but for some people, problems with recognising faces are a part of their daily lives. They have a condition called prosopagnosia, or face blindness, which makes them incredibly bad at recognising faces, despite their normal eyesight, memory, intelligence, and ability to recognise other objects. 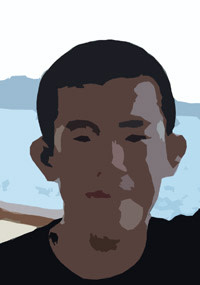 Prosopagnosia can be caused by accidents that damage parts of the brain like the fusiform gyrus - the core part of a broad network of regions involved in processing images of faces. That seems straightforward enough, but some people are born with the condition and their background is very different. They lack any obvious brain damage and indeed, brain-scanning studies havefound that the core face-processing areas of their brains are of normal size and show normal activity.

But these studies were looking in the wrong place - the core regions aren't the problem, it's the connections between them that are faulty. Different parts of the brain are connected by tracts of 'white matter' - bundles of nerve cell stalks that transmit messages between distant regions. They are the equivalent of cables that link a network of computers together and in people born with prosopagnosia, these neural cables are shredded or missing, even though the individual machines work just fine.

Cibu Thomas from Carnegie Mellon University discovered the problem by focusing on two major white matter tracts that link the fusiform area to other parts of the brain. Both have names that positively trip off the tongue - the inferior longitudinal fasciculus (ILF) and the inferior fronto-occipito fasciculus (IFOF). Thomas studied the tracts using a technique called diffusion tensor imaging (DTI), which measures the flow of water along their length.

The flowing water revealed severe problems with the structural integrity of both white matter tracts in the brains of prosopagnosics. Normal individuals didn't show any problems, nor did areas of white matter in the prosopagnosics that connected areas completely unrelated to face processing. 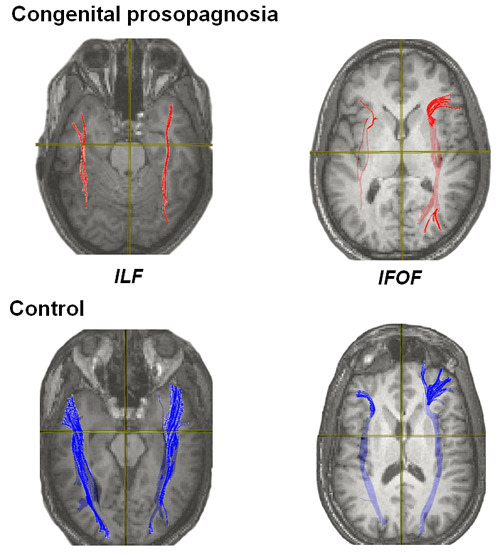 Thomas also found that the severity of these white matter troubles predicted how bad people were at recognising faces, but only in the right half of the brain. The poorer the structural integrity of their right ILF and IFOF, the lower their average scores on a simple test. That's consistent with earlier data, which suggests that the right half of the brain is more important than the left when it comes to recognising faces and that damage to the ILF as a result of multiple sclerosis can induce symptoms of prosopagnosia.

Thomas is now keen to repeat his work with a larger sample of prosopagnosics. Being born with the condition is relatively rare and Thomas only managed to recruit 6 such people for this study. He also wants to use more sophisticated scanning techniques to work out if the white matter fibres of the ILF and IFOF are actually absent in these people or just severely broken.

If his results pan out, they could also give researchers an avenue for understanding how prosopagnosia develops. There conditions is heritable and genetic studies are closing in on the genetic fault that's responsible. Thomas suggests that as a child's brain grows and matures, this mystery faulty gene could be deployed in abnormal ways that disrupt the normal development of certain white matter tracts.

For the moment, if you want to find out more about prosopagnosia, I highly recommend Cecilia Burman's excellent site on what it's like to live with the condition.